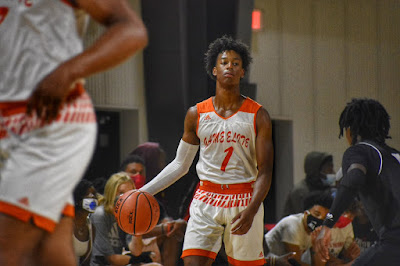 Arkansas: “They have been saying they like the way I play. The head coach loves the way I play. I don’t really know a ton about them yet. They just started recruiting me.”
Auburn: “They told me I remind them of
Bryce Brown
a little bit and that I’m the best shooter they are recruiting so far. I know a lot about them. They have a great coaching staff and a great program all around.”
Florida: “I don’t know that much about them, but I know they are a great SEC program with a great coach. It’s a great all-around program. I talked to coach [Jordan] Mincy. He said he’s been watching the past three weekends and liked what he saw.”
Georgia: “I liked everything about Georgia. It was cool up there. Tom Crean was great. All the coaches were really nice. They have been watching me too and they liked what they saw.”

RIVALS REACTION
Florida was the first high-major offer, but likely won’t be the last for the Georgia native. A recent growth spurt putting him around 6-foot-3 combined with one of the best jump shots in the Southeast will make him a hot commodity. Cormier also has the ability to play some point guard too if needed. Look for Auburn and Georgia to stay involved in his one too and keep an eye on Florida State if they decide to enter into the mix.
at 1:14 PM 4 comments: