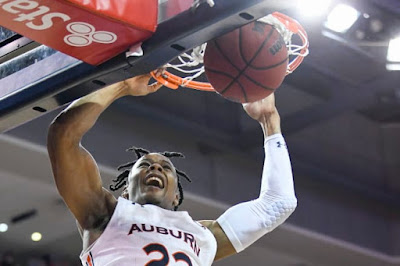 Reprint from Rivals.com
Dan McDonald is back with his weekend primer, McDonald's Nuggets. This week’s edition addresses
Isaac Okoro
’s value for Auburn, why
A.J. White
should be a high-major target in 2021, the Team of the Week and more gambling picks.

The word "valuable" gets thrown around a lot in sports. Most sports have an award for Most VALUABLE Player, but that usually just goes to the best player on the team that wins the championship or has the best record in the league. Being the best player and most valuable can be the same, but not in every case.

Let’s take Isaac Okoro, for example. He’s one of the best players in the SEC and one of the best in the country, but I don’t think he’s the best player. But what we’ve learned over the past week is that he just might be the most valuable. Since getting hurt at the end of last week’s game against Alabama, Auburn has dropped two in a row to Missouri and Georgia, programs that are a combined 8-18 in the SEC. It should be noted that those were both road games, but those are games the Tigers pull out with Okoro in the lineup.


That brings me back to my point about his value. His absence and the subsequent losing streak has helped Kentucky build a two-game lead in the SEC standings with five games to play. And how many times this year has Okoro made a big play in a close game late to help Bruce Pearl’s team pull out a victory? More than a few.
I’ve been watching Okoro since his freshman year at McEachern (Ga.) High School and with his AOT team in the Nike EYBL. This is who he is. He was the key behind an undefeated state championship team for McEachern last year in Georgia’s highest classification with a schedule that put it up against top teams all over the country.
People can ask about his natural position. You can question whether he’ll shoot it well enough to be a high-level NBA player. What you just can’t debate any more is that teams are better with Isaac Okoro. He’s the toughest dude on any court he steps on, and he has a knack for making winning plays late in tight games.
I’d still take
Anthony Edwards
with the first overall pick in the NBA Draft. He’s the most talented player in this draft class. But after that, if I was an NBA decision-maker in June, I’d have to think long and hard about picking Okoro with one of those next few picks. He’s the type of guy you want on your team and in your locker room, and I’d bet on him continuing to improve any flaws in his game. I would trust him over any other top prospect outside of Edwards.

I often brag about the benefits of living in a city like Atlanta, where it feels like I can watch a high-major prospect at just about any high school gym I walk into. On Wednesday, I watched Chattahoochee vs Heritage-Conyers in the second round of the state playoffs and left with two big takeaways.

A.J. White
is a prospect I’ve been watching since early in his freshman year. He’s a 5-foot-10 point guard that can score with the best of them. How does 1,785 points for his career sound? But you’ve probably already figured out why you have likely never heard of him if you’re not from Georgia. He’s an undersized guard.

There was a point in time in which I struggled with small guards myself, but I’m over it after watching prospects like
J.J. Frazier
and
Jared Harper
develop in the Peach State and star in the SEC. I truly believe White can play at the highest level of college basketball. He’s a ridiculously gifted scorer with deep range on his jumper. He’s quick, tight with his handle and makes really good decisions with the ball. For such a talented scorer, he’s very unselfish in keeping teammates involved. He’s become more of a pest on the defensive end this year. He gets better as games go on and never gets rattled (He hit all four free throws in last 30 seconds on Wednesday night.).

I spoke with his head coach, Chris Short, after the game and he had a great story to share about White's instincts as a player. Locked in a tight game for the region championship, Chattahoochee used a 1-3-1 zone to flip the game in its favor. It was a defense they had used before, but there was a tweak that was an idea from White. Instead of putting him in the back to chase the baseline, they shifted it around to place him at the top of the zone. It led to a big run and coach Short credits White’s intelligence for the adjustment.
Clemson, which had an assistant at the game, and Georgia have shown some interest. His offer list includes Charleston Southern, Kennesaw State, Merrimack, North Alabama, Presbyterian, Troy and Winthrop. That list should include some ACC and SEC schools soon.
Speaking of Clemson, the Tigers were also at the game to check in on an under-the-radar wing in the 2021 class:
James White
. He has the look of a potential Rivals150 prospect. At 6-foot-5, he’s a very gifted scorer who averaged around 25 points per game this year in a tough region. Expect him to have a lot of eyes on him this travel season on the Under Armour circuit with the Atlanta Xpress.

TEAM OF THE WEEK: Texas A&M

SHARE YOUR THOUGHTS WITH TEXAS A&M FANS AT AGGIEYELL.COM

We’re on FIRE right now with back-to-back 4-1 weeks to put us at 22-18 on the year, which is a respectable 55 percent. Let’s keep the momentum rolling and put some more money in your pocket this weekend.
Buffalo (+4) hit for us last week and we’re taking them again this week at Kent State. The Bulls won the first matchup at home by four and steal this one outright on the road. Let’s also see if we can score with the under (150.5) here as that seems a little high. We’re also staying with Harvard again this week (-7.5) at home taking on Princeton. Harvard is the better team here and needs to avenge a one-point loss from a couple weeks ago.
I’m going to trust Mike Rhoades to get his team back on track here at Saint Louis and end a three-game losing streak. Take VCU (-1), which played Dayton tough earlier this week, to get a road victory here. The under (134) feels like the right side as well.
at 2:21 PM