Recruiting beginning to take off for 2021 four-star Alex Tchikou 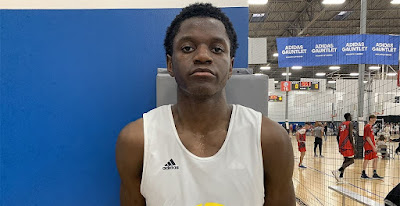 Athletic post players who are 6-foot-11 will always be in demand at all levels of basketball. When you combine those traits with a little skill, you have one of the most highly ranked prospects in any given class, which is exactly what
Alex Tchikou
is in the 2021 class.

His recruitment has taken off in the past six months. He says Arizona State, Kansas, Mississippi State, Oregon, UCLA and USC are among the schools he’s talking to the most. Syracuse, Memphis, Washington, NC State, North Carolina and others have shown interest in the No. 24 prospect in the 2021 Rivals150.
2020 Rankings: Rivals150 | Team | Position
2021 Rankings: Rivals150 | Position

Tchikou talked about the programs coming at him the hardest right now.
Arizona State: “I like their program. I took an unofficial visit there for one of their games. I like how they play and how the head coach lets his players play with freedom.”
Kansas: “They talk to me a lot, too. I like them. They show a lot of interest in me.”
Mississippi State: “They came to a tournament last weekend in Kentucky. I like them. They are always trying to keep it 100 with me and to keep them on my mind.
Oregon: “They are the school talking to me the most. I like them a lot. They came to watch me last week and I had probably 20 points and 10 rebounds.”
USC: “I’ve been there a few times. That’s probably the school I’m closest to because my brother and trainer live in Los Angeles. I like USC a lot.”
Tchikou is still new to the process and in no rush to make a decision, but a pair of Pac-12 programs have emerged as the teams to beat early on. He says Oregon and USC are the two schools that he’s developed the best relationships with and is most familiar with. But again, we’re still likely nine months out at least from a decision. Expect new schools to come into the picture and for his recruitment to have some twist and turns between now and decision day.
at 11:49 AM