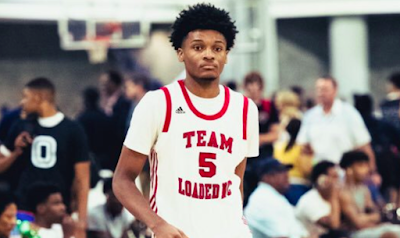 A tall and lanky wing at Hickory (N.C.) Moravian Prep with a burner for a jump shot, Hall adds starpower to a balanced class. He's also a huge win for Kevin Keatts and staff who persuaded him to commit early rather than wait around until the late signing period as initially planned.
“I feel like the system is a hand-in-glove fit for me. Coach (Kevin) Keatts and his staff have sowed constant supports towards me and my family, as well,” Hall said regarding his college decision. “It will be amazing to play in front of my family especially since the ACC is the biggest stage for college hoops.” | S
An in state star who can really stretch defenses with his scoring, Hall is a natural scorer at all three levels.
He can use his size and touch in the post to score over smaller defenders. He has a dangerous mid range pull-up game and he's a glider who gets out in transition and works his way to the rim. His ball handling is an area he will continue to improve and a college weight room should do wonders for his finishing ability.
Now that Hall is official N.C. State's class moves to No. 5 overall in the 2020 team rankings. He joins four-star point guard
Cam Hayes
, three-star guard

Ebenezer Dowuona
to complete the Pack's class.
at 1:45 PM