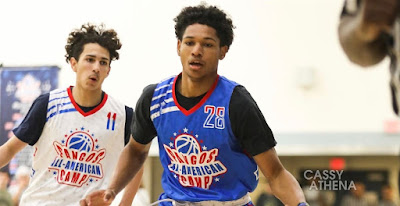 Eric Bossi • BasketballRecruiting.Rivals.com
@ebosshoops  Reprint from Rivals.com
LAS VEGAS -- During the winter,
Daishen Nix   saw his stock go through the roof and he's not backing down now.

Playing at the Pangos Easter Classic with Simply Fundamental Basketball Academy, the 6-foot-4 floor general showed why his stock soared during the winter. He has tremendous size, gets to the rim at will and is as good a passer as there is in high school basketball.
It took a little longer than some of his 2020 classmates for Nix to get national attention but he knew it would happen eventually.
"I think it was just a matter of people seeing what I can do," Nix told Rivals.com. "I just wanted to show everybody that I can play and I think I did that."
Nix had the opportunity to compete with USA Basketball in Minneapolis a few weeks ago and it was a good measuring stick. 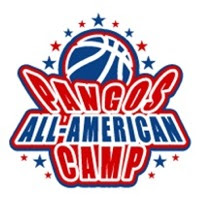 "It was pretty good and it was something different," said Nix. "I had never tried it before, never been there before and I had just always heard about it. I liked it because they could catch my passes, they are more skilled and they are more athletic so it was cool to play with that level of talent."
After his strong junior season, Nix now carries offers from programs like Arizona, Arizona State, Illinois, Kansas, LSU, Maryland, Memphis, TCU, Washington, West Virginia and many others and Texas Tech has recently jumped in.
He's got a good idea of what they like along with his passing and knows what he needs to work on.
"I can finish anywhere, on big people on little people it doesn't really matter," said Nix. "I'm trying to get my strength up so that I can be bigger than everybody else. My defense and my shooting, I need to work on that more."
While Nix has attention coming in from all across the country he's not yet taken any visits and hasn't formalized a list of schools. He did say that he'd like to look into setting up some visits during the summer and that he'll look to cut down his list and start moving towards a decision after the travel ball season finishes.
"Probably after AAU or after this summer I'll cut down my list," said Nix. "It's important to me that a program prioritizes school first over basketball. I like to play in pick and roll and somewhere that they give the guards a lot of freedom."

A 6-foot-8 center from Justin (Texas) Northwest, Freeman caught the attention of Richard Pitino and his staff last summer. That early interest plus a great official visit over the weekend were enough for the three-star post to pull the trigger on a commitment.
"Well the fact that it is Big 10 is good enough as it is," Freeman told Rivals.com. "But really because it feels like family over there they’ve had me on the radar since last summer so I feel like they really care about me."
Relatively unknown on the national scene, Freeman caught the eye of both Minnesota and Rivals.com because of his length, quickness around the rim, budding offense and a body that will carry more bulk without costing him athleticism.
He really runs the floor, can play above the rim and ultimately projects as. plus rebounder. Being an energy guy is a role that he embraces.
"I feel like I could take up some of the weight from when Jordan Murphy was there, so like rebounds rim running and finishing," said Freeman about what he'll bring to the table once he arrives in Minneapolis.
Freeman is the second member of Minnesota's recruiting class and their second Texan. Rivals150 guard
Tre Williams
is finishing high school in Utah but hails from the Lone Star State.
at 8:56 AM No comments: