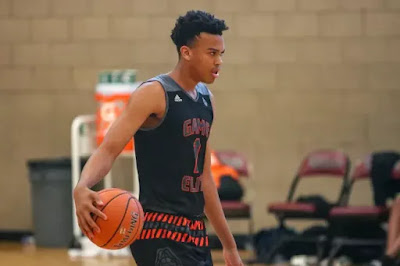 Over the past year, Corey Walker Jr.  has become one of the more highly recruited prospects in the 2020 class. The explosive 6-foot-7 small forward from Florida has programs all over the country making the trip to Jacksonville to see him at his school.


Auburn, Baylor, Florida, Georgia Tech, Louisville, Michigan, USC and Xavier are among the schools Walker says are in constant contact with him. He took an unofficial visit to Florida earlier in football season and will be back in Gainesville on Friday one more time to see Gators on the hardwood.
MORE: Five-star big man Will Baker chooses Texas | Interest in three-star Eugene Brown is picking up

Florida: “Florida was great. I like it a lot. They talk about how I can fit in well there and build the team around me. They’ll let me pick some guys I want to play with if I commit there. I like coach (Mike) White a lot. He keeps it real with everybody, and he’s a nice guy.”

USC: “USC is really good. I feel like for the next four or five years they are going to be really good. They are bringing in some big-time recruits.”
Xavier: “I like them. I like the coaches. I like coach Jonas (Hayes). He’s a cool dude. He talks about how I would fit in with the team and the position I’d play.”

At this point in the process, Florida has to be considered the school to beat for Walker. It is the only school that has been able to get the four-star prospect on campus lately, and he speaks highly of White and his program.
Other programs such as Louisville, Xavier and USC have also put in a lot of work with the No. 30 overall prospect in the 2020 Rivals150, and they shouldn’t be counted out. Walker also appears to be pretty open, so it’s still possible for other schools to come into the picture over the next year.
at 11:48 AM