What is Georgia getting in Tom Crean?

Eric Bossi and Dan McDonald
Rivals.com Basketball Reprint
The Georgia Bulldogs have found their replacement for Mark Fox. Thursday night, the university announced that it had hired Tom Crean to lead its basketball program.
What is Georgia getting in Crean? What's the local reaction? What does he need to do on the recruiting front and what's National Basketball Analyst Eric Bossi's take on the hiring?

During a head coaching career that included a total of 18 years as head coach at Marquette and Indiana, Crean posted a 356-231 record. He has reached the NCAA Tournament nine times, made the Final Four at Marquette in 2003 an reached the Sweet Sixteen three times during his nine years at Indiana.
Though he only finished below .500 one of his nine years at Marquette, Crean's teams at Indiana were under .500 on five occasions. Crean won one Conference USA regular season title at Marquette and two at Indiana.
During his nine seasons at Indiana, Crean landed a total of 22 Rivals150 players and included in that bunch were four five-star prospects.

Some of the top local coaches from the state of Georgia gave their reactions to Crean's hire to Rivals.com.
Discovery High School head coach Cory Cason: “Hopefully coach Crean can come into Athens and push the program over the hump. I think coach Fox and his staff really laid a great foundation for the program. He’s got some good returning pieces especially in the front line and I know we are looking to see the Dawgs back in the NCAA Tournament soon. The ability to consistently recruit the Atlanta area will be a huge factor in his success.
Georgia Stars 17U head coach Chris Richards: “He’s got experience getting high level players and has had a lot of success in the tournament. It’s a good move for Georgia.”
Norcross head coach Jesse McMillan: “Whatever direction UGA goes with the new coach, my biggest concern would be the hiring of someone with little to no connections to our state. I believe all Georgia prep coaches want our in-state colleges and universities to be successful. Unfortunately, this cannot happen without genuine connections. The previous UGA staff was really starting to create those relationships as seen with the recent commitments from top Georgia players, but it took almost a decade to do so. I’m afraid that history will repeat itself without a well-thought out hire. Keeping Jonas Hayes would help. That would definitely bring some continuity.”
Rory Welsh at Langston Hughes HS: "Has a ton of high-level experience with Indiana and Marquette. Proved he can win games in the NCAA tourney. But, obviously he's a Midwest guy, will be interesting to see how he assimilates to recruiting in the South."

A LOOK AT RECRUITING

Georgia currently has two prospects signed in the 2018 class in four-star power forward
Amanze Ngumezi
and three-star small forward
JoJo Toppin
. As long as Crean makes an effort to keep them, it’s likely both will stick around. In the past month, Georgia lost both highly ranked 2019 commitments as five-star point
Ashton Hagans
backed out followed by four-star small forward
Elias King
earlier this week.

Crean will have one scholarship available heading into his new gig. Rumors have swirled for a while that Hagans could move up to the 2018 class, so he immediately becomes Crean’s biggest target in the short term. If he’s on campus next season, he changes Georgia’s whole roster immediately. Beyond that there's not a lot left in the class of 2018. Crean will likely at least inquire about five-star power
EJ Montgomery
but Montgomery is already pretty far down the road with national powers like Duke, Kentucky and North Carolina among others. Three-star point guard
Myreon Jones
recently backed out of his commitment to Memphis following Tubby Smith’s dismissal and could be an option as could three-star combo guard
Tye Fagan
if he opts out of his Middle Tennessee State letter of intent with Kermit Davis heading to Ole Miss.

In the 2019 class, there are quite a few players for Crean to immediately get involved with. Four-star wings
Marcus Watson
,
Isaac Okoro
and
Elias King
are all talented wings located within 100 miles of Georgia’s campus.
Kyle Sturdivant
and
Brendan Tucker
are point guards ranked in the Rivals150 located just down highway 316 in Gwinnett County. There are also under the radar prospects like
Jaylin Williams
,
Rodney Howard
and
Jamir Chaplin
who could pop up on Georgia’s radar just in the state alone. If the Bulldogs are able to reel Hagans back in, five-star wing
Christian Brown
is a prospect Georgia’s previous staff made a lot of progress with as he’s close friends with Hagans and a former Game Elite teammate.

It should also be noted that five-star forward
Trendon Watford
's brother,
Christian
, played for Crean at Indiana.

Tom Crean has proven that he is able to get things done at a high level. At the same time, things started to get ugly towards the end of his tenure at Indiana.
My main questions are regarding on the court performance and local recruiting. Those are the two areas that Georgia most wanted to improve because mediocre was no longer going to be good enough.
However, during nine years at Indiana - one of the nation's premier jobs - Crean posted almost the exact same overall records (166-135, 71-91) that Fox (163-133, 77-79) did during his nine years at Georgia. In Crean's defense, he inherited a huge mess that included NCAA issues and he did make three Sweet Sixteens along with winning the Big Ten twice. The best Fox did at Georgia was tie for second in the SEC and he failed to win a single game in his two NCAA Tournament appearances. From a standpoint of winning league titles and wining games in the NCAA Tournament, Crean is clearly a big upgrade.
Given his start at Marquette and the ability he's shown to develop players like
Victor Oladipo
and
O.G. Anunoby
from three-star prospects into first round picks, I do not doubt that Crean can coach and maximize talent. The issue is going to be getting enough talent, particularly locally.

Prior to leaving Indiana, a big disconnect was developing between Crean and the local talent. Of the 38 four-star prospects to play in the state of Indiana while Crean was coach, he landed only seven of them and that includes 2012 when he landed four. After landing the four in 2012, Crean only landed one of 23 four-star or better prospects from the state of Indiana - five-star
James Blackmon
in 2014 - between 2013 and his final 2017 season.

I do think that a year off like Crean had can do wonders. Hopefully he's been able to re-evaluate how he does things and most of all how he builds local relationships for recruiting. In order to succeed at Georgia it's going to be imperative that he recruits locally better than he did while at Indiana. If he can put together a staff that can help keep home some local talent while still recruiting nationally like he has proven he can do, then Crean could very well be the guy to turn Georgia into the program many nationally think the Bulldogs could be.
at 11:32 AM No comments:

"TeamHollyHoops": 'Zona will cut down the nets!

March Madness Baby!!!  Basketball’s best time of the year…..way more fun to watch college kids party than the NBA’s 7 game set-piece (although that has it’s own fun as well).

So who am I taking and why?  Let’s go through the brackets: 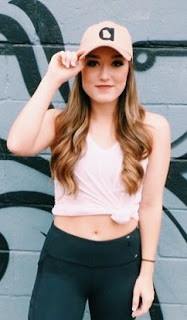 South Region
Who doesn’t love Virginia – high IQ in the classroom on the court….overall the tournament’s top-seed.  Kentucky’s Diaper Dandy’s finally started to jell towards the end of the year.  Davidson is everyone’s darling including super-alumni Steph Curry.  Cincinnati has the muscle and the meanness.  But c’mon, nothing would cause the NCAA more misery than the Wildcats from Arizona advancing to the Final Four.  They were undervalued in their seeding in my opinion.  Deandre Ayton could be the #1 pick right ahead of Marvin Bagley. 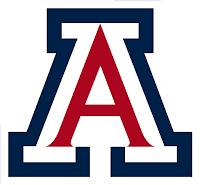 West Region
Nothing struck my fancy here except North Carolina is a 2 seed with 10 losses.  Xavier is the #1 seed but Gonzaga and Michigan are the hottest teams form this region entering the tournament.  Great Final Four story last year, but not the same line-up for Mark Few’s Gonzaga squad.  Michigan has the better fight song, and their Big Ten tournament win over rival Sparty is more impressive.  Hail to the Victors!

East Region
Will I ever pick a one seed?  Villanova under Jay Wright has been arguably the best program in the country the last 4 years.  I like Purdue’s size, and I’m crushin’ on fellow Atlanta superstar Colin Sexton…..but this region doesn’t match up with ’Nova.  Philly’s best heads to San Antonio. 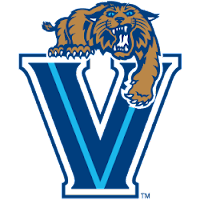 Midwest Region
Did Jay Bilas say the South was the toughest region???  No way Jay!  Sparty, the Dookies, Kansas, and an assortment of 20+ winning teams from Power 5 conferences…….everyone loved Michigan State at the beginning of the year, and Izzo usually gets his guys to perform well in the tournament.  But Coach K has a free path to the Sweet 16, that will galvanize his young players to meet the moment (Coach Izzo does have better hair, sorry Coach K).  Cameron Indoor’s Finest will advance to the Final Four!

Holly’s “I love the men from Duke” pick:
DUKE

So, who cuts down the nets in San Antonio?

Arizona is too strong for Michigan, and Duke has too much talent for Villanova to hold off.  In the finals, it will be Arizona vs. Duke, with a match made in NBA front-office heaven.  Who wins the title?  ‘Zona, with too much Ayton, knocks off the Devils 72-66.  We get to watch the NCAA staff squirm as the trophy is handed to Sean Miller…..FBI agents will remain on the sideline for now.  😊

"March Madness: The Bracket is Here!!!" 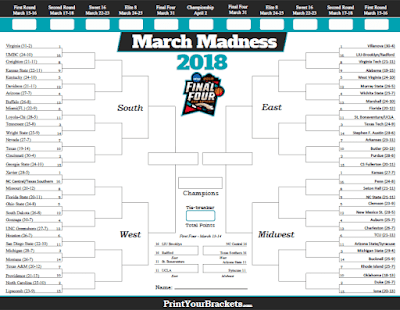 Create up to 25 brackets and compete against ESPN talent, pro athletes and celebrities for all the bracket glory! Play now
I've heard it all in the years I've written my annual bold predictions. These critiques often follow calls for my resignation and subsequent retirement from sports journalism.
North Carolina fans still point to the infamous "UNC won't last the first weekend" prediction in 2016. Well, the Tar Heels reached the national title game that year.
But ... I'm still here!
I'm not deterred. And I won't waste time explaining the intent of a piece called bold predictions. Let's just get to it.
Adjust your brackets accordingly. Here are this season's bold predictions for the NCAA tournament: 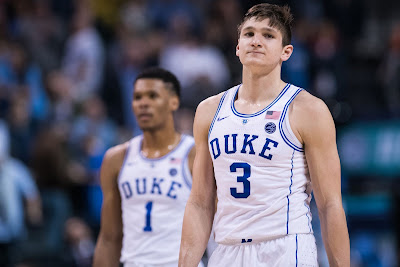 Duke's Grayson Allen (3) reacts during the ACC Tournament vs. North Carolina Andres Kudacki/AP Photo
The entire ACC will watch the Final Four from homeNo league in America matched the ACC's nine-bid haul on Selection Sunday. But the paths for the league's top contenders -- North Carolina, Virginia and Duke -- to reach the Final Four come with complications. Virginia's path to San Antonio will probably demand a win over Arizona or Kentucky -- a pair of squads with unique frontcourts and big wings capable of playing the inside-outside attack needed to beat Tony Bennett's team -- in the Sweet 16. Tennessee or Cincinnati would probably await the Cavaliers in the Elite Eight if they pass those tests. This is a loaded region for the No. 1 overall seed. Michigan State, Rhode Island, Oklahoma, Kansas and Auburn could all block Duke, a team that lost two games to a North Carolina squad that shot below 34 percent from the 3-point line, from reaching the last stage of the NCAA tournament. 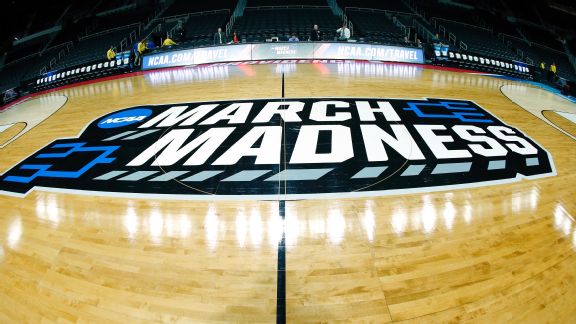