Our own Holly Hickman from "TEAM HOLLY HOOPS" hooked up with Marcus Young from i3Commit and ATS Training recently to find out about some of the best training techniques and weight sets to use for the up and coming elite youth athlete.
Joining her were local stars Kami Young and Alex Acosta, as well as youth coach Tremain Davis.  Special thanks to the North Cobb Christian basketball program for the use of their facilities.  You can follow Holly on twitter with her handle @teamhollyhoops!
﻿
﻿


Montgomery originally committed to Auburn in September of2016, but opened up his recruitment following the arrest of Auburn assistant Chuck Person in September as part of the FBI investigation into college basketball.
Ranked No. 11 overall in the senior class, Montgomery has become a hot commodity since then and is now working with a final list that includes Clemson, Duke, Georgetown, Georgia, Kentucky, North Carolina, South Carolina, UCLA, USC, Vanderbilt and Wake Forest.
Roy Williams made two visits to Georgia last week to see Montgomery. Kentucky had an assistant in last week and John Calipari is expected in today. Duke and North Carolina will both host him for unofficial visits over the next week as he starts to move forward with the recruiting process.

Montgomery and his coach at Wheeler, Larry Thompson, discussed several of the programs involved and where he stands in the recruiting process.
On what he’s looking for on his trips to Duke and North Carolina: “I’m just looking at the atmosphere,to get a better feel for the coaches, to build a closer relationship with them, and see how I feel about the campuses and try to picture myself in those uniforms.”
North Carolina: “I like their coaching staff a lot. They’ve just been telling me they want me to come in and make an impact on their team and help them win. I’ve talked some of their recruits and they aretrying to make me feel better about going there.”
Duke: “It’s been similar to Carolina. They want me to come in and how they need another big man. It’s definitely an attraction to go play with all the recruits they have, but I’m just trying to weigh out all my options. I’ve talked to them a little bit.”
Kentucky: According to Wheeler head coach Larry Thompson, “They have been extremely aggressive. I got a text from them right before they played Tennessee. Coach [John] Calipari is supposed to come for practice today. Coach [Kenny] Payne wanted Coach Cal to make the offer official today. I think he’s definitely interested. I mean, it is Kentucky.”
Georgetown: “Patrick Ewing being the coach there, that’s the main reason why I have them on my list. I feel like I can learn so much from him. He’s a great coach and was a great player.”
Vanderbilt: “Vanderbilt’s program is pretty good. They have a great class coming in. Their coaches contact me almost every day and we have a great relationship.”
Georgia: “I’ve been thinking about them a little bit since they lose
Yante Maten
. They aren’t my hometown school, but I go to school here in Georgia. I have close relationship with their coaches too.”

Clemson: “They are doing pretty well this year. I have a good relationship with their coaches.”

After he visits Duke and North Carolina, Montgomery says the next step for him will be to narrow down his list even more, likely to five schools. Once he figures out those five schools, he’ll begin setting up official visits to each school. He’ll make a decision after he takes all this visits.
Behind the scenes, this is starting to sound like a major blue blood battle. Duke already has one of the best recruiting classes ever and Montgomery could give the Blue Devils their own version of the Fab Five. North Carolina is also knee deep in this one as Roy Williams seems to be putting on the full court press of late. When John Calipari comes into the picture, it’s never a good idea to count him out. The two wildcards in his recruitment could be Georgetown and Vanderbilt. The idea of playing for Patrick Ewing at Georgetown seems to have his attention. Vanderbilt’s strong recruiting class under Bryce Drew, which could get even stronger if the Commodores add Romeo Langford, could be enough for him to think long and hard about taking his talents to Nashville next year.
at 9:08 AM No comments:

i3commit is a new training regimen invented by Young for the up and coming prep basketball player.  Marcus described how i3commit works with our very own Lauren Hoffman! 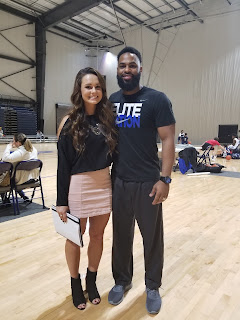