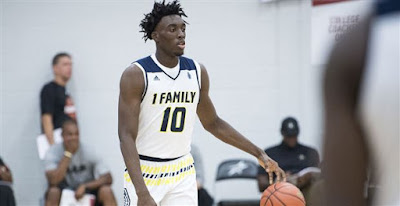 Little, a 6-foot-6 small forward, chose the Tar Heels over Georgia Tech, Duke, Arizona and Miami.
"I just love Coach [Roy] Williams," Little told ESPN. "He really cares about the players off the court, which is important. They're a basketball school, which is something I wanted to be a part of. Coach Roy really knows how to win. I love winning. I really do. And that's important to me."
Arizona and Miami were considered the favorites for most of the past couple months, but both schools were mentioned in an FBI investigation last week. Little's AAU program director, Brad Augustine of 1 Family Hoops, was one of the 10 men arrested.
Shortly after the news broke, Little said he removed Arizona and Miami from consideration.
"I just didn't want to be mixed in a situation where any of the accusations seemed like it was true. Because it wasn't," Little said on Wednesday. "Every school I was considering was because I had a genuine interest in them. North Carolina had been the school I wanted, regardless.  "I just block it out. They can say they want. I just focus on myself, and do what my heart desires."  The 1 Family Hoops program released a statement on Twitter last week, regarding the investigation.  "We would like to address the allegations against one of our families," the statement read. "The Little family did not ask for, nor were offered money by any institution or individual. They were completely unaware of any of the alleged offenses that may have mentioned or contained their son's name. 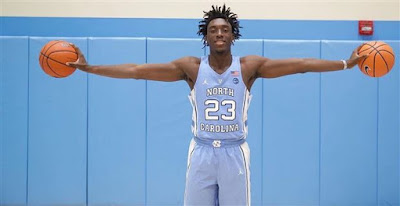 "There is not one single player in our program, nor family member of any player, that had any knowledge or discussion about payments being made in regards to making a college decision. We stand by this 100% and will allow the truth to come out as this process unfolds."
Ranked No. 14 in the ESPN 100, Little slots in as the No. 4 small forward in the 2018 class. He averaged 17.6 points and 7.5 rebounds on the Adidas Gauntlet circuit this spring and summer, vaulting into five-star status in the rankings. Little is also a high-level defender who can guard multiple positions.
"They're looking at me to play immediately," Little said. "They're losing a wing in Theo Pinson. They need another tall, athletic wing that can come in and make plays. They want me to be that guy."
His ideal comparison at the NBA level is San Antonio Spurs star Kawhi Leonard.
"Just the way I play at both ends," Little said. "Offensively, very versatile. I can shoot the 3, midrange, post up smaller guards, athletic, finish inside. And defensively, I play with toughness and motor that most people don't have."
Little is North Carolina's third ESPN 100 commitment in the 2018 class, joining four-star guards Coby White (No. 25) and Rechon Black (No. 48). The Tar Heels are also one of the few schools remaining for elite forward Simi Shittu (No. 6). Shittu will visit Chapel Hill in November.
Williams has now landed at least one five-star prospect in five of the past six classes. North Carolina is the defending national champion, having defeated Gonzaga for the title in April.
at 9:45 PM 2 comments:

Is Brendan Tucker the next late-bloomer from Georgia

Dan Mcdonald - Rivals.com
Over the past few years, the state of Georgia has produced some pretty notable prospects who didn't earn notoriety until later in their recruitment, is junior point guard Brendan Tucker the next breakout star from the Peach State?
In 2015, current Denver Nugget shooting guard
Malik Beasley
emerged later in the process. It took until the latter half of his junior year for Alabama's star freshman
Collin Sexton
to hit the national radar. An explosive athlete off to a sizzling start to his junior season, Tucker could be headed down a similar path.

Georgia became his first high-major offer right before Thanksgiving and Clemson jumped in with an offer on Tuesday night. Georgia Tech has shown a lot of interest. Previously, he had collected offers from UAB, Florida Gulf Coast, College of Charleston and Kennesaw State.

Clemson: “Clemson is good. They have a nice coaching staff and the facilities are good. They have a nice team and a nice arena.”
Georgia: “They are really good people. I’ve been getting recruited by them since like the 8th grade, so I know them pretty well. I talk to Coach Jonas Hayes. He just talks to me about keeping Georgia on my mind and trying to get me to go there.”
Georgia Tech: “They’ve been talking to my mom a little bit. They’ve done well so far with Coach [Josh] Pastner.”
On schools he’d like to hear from: “I’d like to hear from UConn, Syracuse, Kansas, Florida and some California schools. Those are some schools I’ve been watching since I was young.”

Comparing Tucker to Malik Beasley and Collin Sexton, a first round pick in the 2016 NBA Draft and a likely high lottery pick in the 2018 NBA Draft, doesn’t mean he’s going to follow in their footsteps with a quick stint in college before leaving for the NBA. But he will likely join them in becoming nationally known prospect over the next year. Clemson and Georgia will be the first of many high-major offers for him, and both programs were smart to get involved early, especially given their proximity to him.
Tucker said he’s not going to be rushing into a decision and plans to play out the travel season before making a decision. He did mention he’s going to be attending a few Georgia games and plans to be back at Clemson soon as well.
at 9:40 AM 2 comments: