R.J. Barrett
, the top-ranked wing in the 2018 Rivals150, is set to end his recruitment Friday and announce his commitment to Oregon, Duke or Kentucky. There is no trophy in recruiting for finishing second or third, but missing out on Barrett will sting for some more than others.

In Making the Case for Barrett, we look at what he might bring to each program and how crucial he is for those in pursuit.

Need Factor: 5
It should speak volumes that Duke's need for Barrett is relatively minimal, but that's what you have with the Blue Devils in this one-and-done era. They still must replace a handful of their top scorers following this season as

Grayson Allen will exhaust his college eligibility, and the rest of the likely starting five - Marvin Bagley III, Wendell Carter, Trevon Duval and Gary Trent Jr. - could all opt for the NBA. Duke should be able to withstand some of those losses as the program already has two five-star perimeter weapons headed its way in 2018.  Call me a pessimist, but sliding Barrett alongside elite classmates

Tre Jones and Cameron Reddish would be difficult from the outset as all three are fairly ball dependent. Reddish is so good and unique as a 6-foot-7 playmaker that can create his own shot. Barrett is an elite scorer who would much rather play on the ball than off. Jones is a point guard that has become valued for his facilitating abilities. Mike Krzyzewski has worked wonders in past years in getting elite prospects to buy in, but slotting prospects in new and unfamiliar roles would be one of his most difficult tasks to date.

Need Factor: 10
Oregon enters the new season returning just three players that were on last season's Final Four unit. Dana Altman is one of the top talent developers in college basketball but this year should be a difficult task for him. What will be even more difficult is that the Ducks will lose likely their top two producers after this upcoming season in grad-transfers
Elijah Brown
and
MiKyle McIntosh
. Oregon's cupboard is not totally bare but it is crucial that the Ducks walk away with Barrett's signature.

Thanks to the in-roads that the Ducks staff has made in Canada and their early work with Barrett, Oregon remains in the five-star's final three. Oregon would lean on Barrett for his scoring and takeover abilities, something that this year’s roster may be lacking. The Ducks have become known for their versatility and ability to play in more than one manner, a role that Barrett would thrive as a go-to scorer from day one.

Need Factor: 7
The last time that Barrett and John Calipari shared the floor, the two were on opposite sidelines in Egypt as the Canadian just demolished the Calipari-coached United States under-19 squad to a tune of 38 points, 13 rebounds and five assists.
While the addition of Barrett would be another major recruiting coup for Calipari, just how much do the Wildcats need him? Entering the college basketball season, there is no definite, can’t-miss NBA prospects on this year’s UK team. Backcourt stars
Quade Green
and
Shai Alexander
are expected to return next year, while
Hamidou Diallo
and
Kevin Knox
, the Wildcats' potential top two scorers, will likely head to the NBA. UK's shooting will be its biggest question, and that happens to be a major question mark for Barrett as well. Does Kentucky desperately need Barrett? No, but his addition would be another key piece in assembling what might be an older, more experienced crop for UK next year.
at 2:52 PM 2 comments:

"Thank You" to our American Veterans 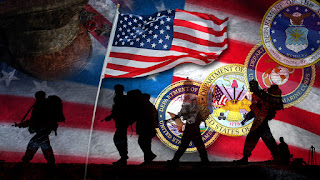 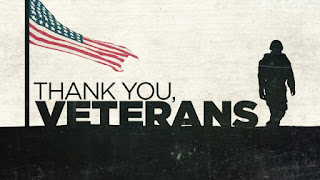