Suspended Louisville basketball coach Rick Pitino received almost all of the cash that Louisville received from Adidas in the school's expiring deal with the shoe company, according to a report, though an Adidas spokesperson said all the money in the new deal recently signed is earmarked to the school.
The Louisville Courier-Journal reported on Thursday that Pitino received 98 percent of the cash Louisville was to receive, which is roughly $1.5 million a year for five years through July 1.

Adidas spokesperson Katja Schreiber told ESPN that the new deal with the school -- a 10-year, $160 million pact that Louisville and the shoe and apparel company announced in late August -- has different terms.
Schreiber said that in a typical college deal, Adidas agrees to provide cash and an allotted free-product budget and allows the university to delegate how it wants the cash shared. In the case of the new deal, Schreiber said all the cash will be earmarked to the school.
Although Schreiber said it "was the plan all along" for the Adidas money in the new contract to go to the school, it is unclear why that was made the case. Schreiber said she couldn't get into more specifics.
Such contracts with schools and coaches vary. Some include shoe and apparel compensation in a coach's contract, while others keep a personal services contract with the coach that is separate.
Louisville interim president Greg Postel said Monday he is planning to learn more about the school's $160 million sponsorship extension with Adidas, which is the sixth-largest shoe and apparel deal in terms of total money in college sports. 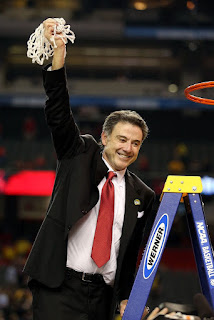 Postel criticized athletic director Tom Jurich, who is on paid administrative leave, in his disciplinary letter to the AD for failing to update the athletic board about that extension.
Postel also was authorized Monday to begin the process to fire Pitino because of a federal bribery investigation, a scandal that has shaken the university and brought down one of the most prominent coaches in college basketball.
The Louisville Athletics Association, a separate body of officials that oversees the school's sports programs, unanimously approved a resolution to fire Pitino after meeting for more than two hours on Monday.
Pitino was placed on unpaid administrative leave last week after law enforcement officials announced the probe and the school acknowledged its inclusion in the investigation. Though Pitino is not named in court complaints, Postel said the allegations violated his contract and provided just cause for Pitino to be placed on unpaid leave.