Wendell Carter, the No. 3 overall player in the ESPN 100 and the No. 1 power forward in the class, won the boys' 2017 Morgan Wootten National Player of the Year award on Tuesday. 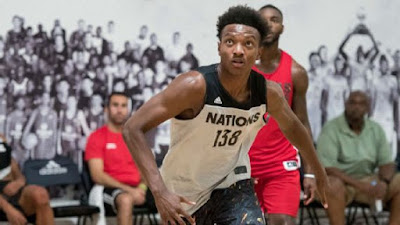 "I was shocked when I got the news," said Carter, who will compete for the East squad later this month in the McDonald's All American Game. "There are so many talented and flashy players in the game."
Carter, who is 6-foot-9, signed a national letter of intent last year to play at Duke. He is a senior at Pace Academy in Georgia and has led the Knights to their second straight appearance in the state championship game.
The Wootten award goes to the student-athlete who best exemplifies the completeness of outstanding character, leadership and academics. Carter is a member of the National Honor Society, takes an active role in theater at Pace Academy and is involved in his community.
From a basketball standpoint, Carter also checked all the boxes for the award, which recognizes someone who is special in the game and will be at the next level. Previous winners include LeBron James (2003), Dwight Howard (2004), Jabari Parker (2013) and Lonzo Ball (2016).
"To be in the company of some of the former POY players is humbling," Carter said. "This goes to show all the countless hours in the gym and studying paid off more that I even imagined. My parents, family and friends have given me so much support, and I give all the glory to God."
Carter is a productive and consistent player thanks to his low-post scoring ability and his high-level rebounding. He was named to the 2017 USA Junior National Select Team that will play in the Nike Hoop Summit. He also was chosen to play in the Jordan Brand classic in April.
"At the moment, I will cherish this award," he said. "It will motivate me now even more when I move on to Duke."
at 5:39 PM 1 comment:

The rosters for the 40th annual McDonald's All American basketball game were unveiled Sunday night on ESPNU.

Kentucky has four signees playing in the game, including Nick Richards (No. 12), P.J. Washington (No. 16), Quade Green (No. 21) and Jarred Vanderbilt (No. 22). Duke and UCLA each have two selections apiece.

Twelve schools will have signees playing in the game.

Only three players in the top 24 of the ESPN 100 were omitted. Five-star wing Hamidou Diallo (No. 11) enrolled at Kentucky last week, but wouldn't have been eligible anyway due to his status as a fifth-year player. Jalek Felton (No. 23, North Carolina) and John Petty (No. 24, Alabama) were the highest-ranked nominees left out.

The game will take place March 29 at the United Center in Chicago.

Hamidou Diallo, No. 11 in ESPN 100, picks Kentucky over UConn

Five-star wing Hamidou Diallo has committed to Kentucky.
Diallo announced during a news conference at Our Lady of the Angelus in Rego Park, New York, that he will enroll at Kentucky next week.
"Next week, I will be attending the University of Kentucky," he said.

While Diallo will enroll at Kentucky immediately, he is likely to redshirt the spring semester and play as a freshman during the 2017-18 season. He is the second five-star prospect in the 2017 class to enroll early in college, although Austin Wiley enrolled at Auburn in December and played immediately for the Tigers.
Diallo, a Queens native who attended Putnam Science Academy (Connecticut), chose the Wildcats over Connecticut, although Arizona, Syracuse, Indiana and Kansas were also on his final list of six.
A 6-foot-5 shooting guard, Diallo does most of his damage at the rim and in transition. He has improved his jumper, though, and looked a lot more comfortable from the perimeter over the past couple of months. Given his length and athleticism, Diallo also projects as a versatile and aggressive defender. He averaged 19.1 points and 5.8 rebounds on the Nike EYBL circuit last spring and summer with the NY Rens AAU program.
Diallo is ranked No. 11 in the ESPN 100, slotting in as the No. 3 shooting guard.
John Calipari and Kentucky have had the No. 1 recruiting class in 2017 since late November, with Diallo the fifth five-star senior heading to Lexington. He joins center Nick Richards (No. 12), power forward P.J. Washington (No. 16), point guard Quade Green (No. 22) and forward Jarred Vanderbilt (No. 23) -- along with four-star guard Shai Gilgeous-Alexander (No. 44). This will be the ninth consecutive season Calipari has had a top-two recruiting class at Kentucky.
Because Diallo graduated from Putnam Science last spring, he is technically eligible for the NBA draft. However, he has maintained all fall that he plans to play in college, telling ESPN in late November that he was "100 percent going to college."
However Diallo could at least test the NBA draft waters this spring.
at 3:45 PM 1 comment: