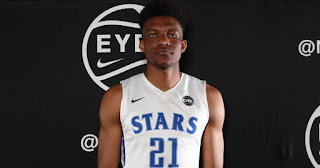 "Big competition in the ACC," Obiagu told ESPN in a text message. "Huge chance to play and make an impact right away. Great coaches and program."

ESPN 100 center Ikey Obiagu has committed to Florida State. Joe Robbins/Getty Images
Obiagu, a 7-footer from Greenforest Christian Academy (Georgia), is ranked No. 42 in the ESPN 100 for the 2017 class.

He is one of the best defensive players in the country, using his size and length to rebound and block shots at a high rate. Obiagu averaged 5.3 rebounds and 1.8 shots in just 13.7 minutes per game with the Georgia Stars on the Nike EYBL circuit in the spring. His offense isn't quite there yet, but he finishes well around the rim and is able to run the floor effectively.

Hamilton has consistently done well with 7-footers in the past. Obiagu is the most highly touted one since Solomon Alabi in the Class of 2007.
at 2:08 PM 2 comments: