The Discovery of Benny Anders answers a childhood mystery

ESPN's "30 for 30" episode Phi Slama Jama was an emotional evening for your humble author.  For those of us high school basketball players of the early 1980's, nothing encapsulated the new era to come like the University of Houston and Phi Slama Jama. 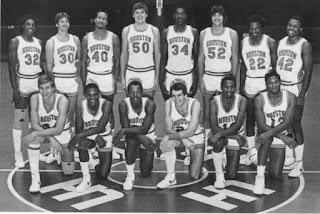 Early '80's college hoops is now resplendent with iconic moments, larger than life characters, and the most memorable of historical events in the sport's history.  Many have referred to the 80's as the "Golden Era" for the NBA, with the now well-known story line of Magic and Bird, and a young fellow named Mike Jordan coming up the rear.  But in the era of rabbit ear televisions and new boxes known as cable on top of the set, nothing was bigger than Akeem the Dream, Clyde the Glide, Mr. Mean and the Cougars of Houston.....aka - Phi Slama Jama.  The name, as most readers know, comes from the number, volume, style and ferocity of their dunking, which became a menacing art form, and for which they attempted to do on virtually every possession.

Other names were transcendant in that era:  Ewing, Mark Price, Mullin, Antoine Joubert, Sampson, Worthy, and of course - Jordan.  The teams were equally historical - Georgetown, NC State, UNC, Villanova....all had iconic moments in the early to mid '80's.  Most of which are well known to true basketball followers and historical markers in the pantheon of American sports today.

No name, however, had greater mystery than the name of Benny Anders, the best dunker on the Phi Slama Jama team. 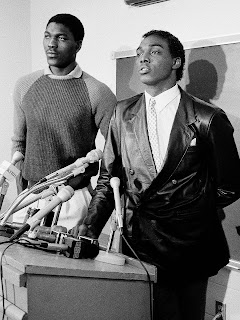 Benny Anders was my favorite player. Their losses in three straight Final Four's were obviously painful to them and their fans, but not me - I simply enjoyed the ride!  As a 15 year old, I remember drawing the conclusion that many historians have years later - the Louisville-Houston Final Four game was the greatest basketball game I had ever watched.  Dunk after dunk after dunk.  It was unbelievable even to this day.  There would be others:  I was present and attended the Duke-Kentucky Regional Final game in Philadelphia in 1992......Villanova-Georgetown......and then of course, the actual final between Houston and NC State, considered by most the greatest upset in the history of the sport.

The Phi Slama Jama story is only complete with a discussion of the disappearance of their greatest player, my favorite player....a player I considered better than Michael Jordan at the time.   His name was Benny Anders.  Anders disappeared after a few stints in minor league basketball.  Not went into hiding.....not that he was refusing to answer phone calls or talk to the media......he literally disappeared.  In the age of camera phones, the internet, NO ONE knew what happened to him or where he was.  No one.  Not even his family!  It was as if he fell off the face of the earth. 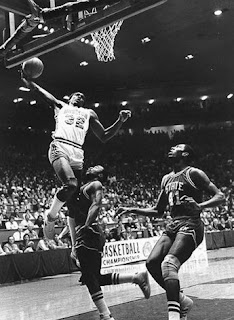 Our fondness for Anders, and the joy of his memory that he gave to me as a young high school basketball fanatic, are celebrated by this blog by putting one of Anders' famous one-liners in our header:  when referring to Hakeem Olajuwon (at the time known as Akeem) - "When I drop a dime to the big swahili, he gotta put it in the hole."  Many ask where that line comes from when they come to the blog.  When I tell them, many know who Benny Anders was, some do not, and all wonder what happened to him

The 30 for 30 show documents the outlandish style we remember vividly from that era and from Anders himself - the black suits, the "OUTLAW" tee shirt, the black sports car.  Other great lines from Anders included "I don't wanna play for no Phi Slama Clappa" right before quitting the team during the 83-84 campaign as a junior.  That would be the 3rd of 3 straight Final Four's and back-to-back title game appearances (he would later rejoin his teammates before the '84 Final Four).  My favorite line was after the '83 Regional Final - "Coach said take it to the hole and stick it to him, so I took it to the hole and stuck it to him." 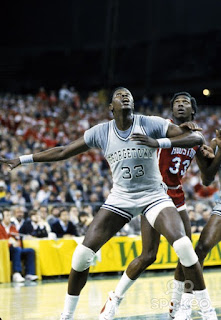 Over the last 30+ years I have literally wondered out loud, in discussions with friends, the proverbial barroom arguments over greatest ever, whatever happened to Benny Anders?  I would tell my children about him, how he was better than Jordan, could have been the greatest player to have ever played, and he just disappeared.  I would show my kids Youtube clips....tell my wife whenever a story would pop up on TV about those Houston teams.....it was a childhood mystery bordering on obsession.

Sports Illustrated tried to find him, with an article in 2013 titled "Seen Benny?  Have him give me a call." (http://www.si.com/vault/2013/03/25/106300716/seen-benny-have-him-give-me-a-call)  It was a great read, detailing some of his great moments in text that helped rekindle my own childhood memories.  What makes it an obsession is the total iconoclastic American nature of the story. Childhood superstar.....failed potential.......disappearance from sight......all tied to my own youth and experiences as a high school student athlete.

And then - Benny is found. 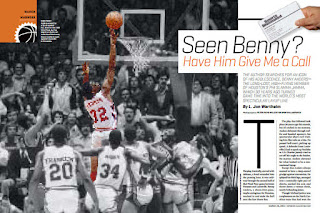 ESPN did a masterful job with this episode.  No discussion of Phi Slama Jama can be done without the Benny Anders story, and his disappareance, and now his resurrection.  While you can quibble over the pacing of the game footage, and a better narration of the march to each Final Four, the overall effect of the show is quite moving.

A folk tale I had shared with my children.......a man who had gone missing from the public stage...... perhaps the greatest player that never was......he was finally found.  Through the detective work of two former teammates, Benny is found in Detroit.  Not over weight, no drug problems, but noticeably alone.

Benny Anders does not know me, but I would love to meet Benny Anders.  More than my favorite player of all time, Larry Bird.  More than the greatest player of all time, Michael Jordan.  The player I would like to meet is Benny Anders.  My Saturday afternoon's, my youthful NCAA tournament experiences, begin with and were most memorable, with Benny and Phi Slama Jama.  I'm glad you were found Benny, and I am glad we got to see you again!

By Steve Rodriguez, a very happy author of this story.
at 9:55 AM