Rivals Recruiting Analysis from Rivals.com
EMERSON, Ga. - Last July, Naji Marshall had only an offer from Towson, but high-majors were beginning to monitor his progress. Fast forward a year and the Maryland native is No. 62 in the Rivals150 and a priority target for high-major coaches.
“Xavier, Virginia Tech, South Carolina, Rhode Island, Pittsburgh and there are a bunch more that I can’t think of,” Marshall said when asked which schools are involved in his recruitment.
To show how much of a priority he is, the first four schools Marshall mentioned sent head coaches to watch him play on Thursday afternoon against the Atlanta Xpress. The four-star prospect showed exactly why schools are so intrigued by his abilities.
At about 6-foot-6, Marshall is a tough, hard-nosed wing that is at his best attacking the basket. Not known for his shooting ability from three-point range, Marshall has apparently worked to improve that weakness as he connected on a few long range shots on Thursday. In the second half, he put on quite the passing display as well and finished with at least five assists.

It’s not often that unranked wings without high-major offers come into a shoe company event and completely dominate, but that’s exactly what Anthony Mack did for the South Jersey Jazz. The 6-foot-5, 215-pound guard’s best trait is probably his jump shot and deep range, but he’s a tough ball handler and a terrific passer. In an 82-74 win over the Houston Defenders, Mack had somewhere in the neighborhood of 30 points, but also dished out several assists and reeled in quite a few rebounds.
His coach with the South Jersey Jazz, ESPN NBA analyst Tim Legler, has high praise for his star player.
“He’s stud,” Legler said. “He does everything well, but what makes him so good is his toughness. He’s just a tough kid.”
Prior to last week, Mack had 17 offers total from mid-major schools, but he’s now become a target for high-major programs.
“I talked to coach (Tom) Crean from Indiana, coach (Chris) Mullen from St. John’s and coach (Chris) Collins from Northwestern,” Mack said. “Those are all new from last week. I heard from Marquette, Virginia Tech, California and USC too.”
Mullen watched Mack in his second game of the day against Splash City.

Team Charlotte doesn’t always have the most talented team on the Under Armour circuit, but they certainly always rank towards the top in toughness. This year, they also have the benefit of having one of the top point guards in the Under Armour Association in Devon Dotson to lead the way.
Dotson’s leadership was on full display in Team Charlotte’s 87-67 win over KC Run GMC. Dotson did his fair share of scoring as his jump shot looked as good as ever, but he did a really good job of balancing his roles of scoring and distributing the ball to teammates.
The No. 49-ranked prospect in the 2018 Rivals150 recently added four new offers to an already impressive list.
“USC, Providence, Florida State and Memphis offered recently,” Dotson said. “It’s been mostly the same schools though. UNC, NC State, Florida, Clemson, Wake Forest, Georgia, and Tennessee are all talking to me.” 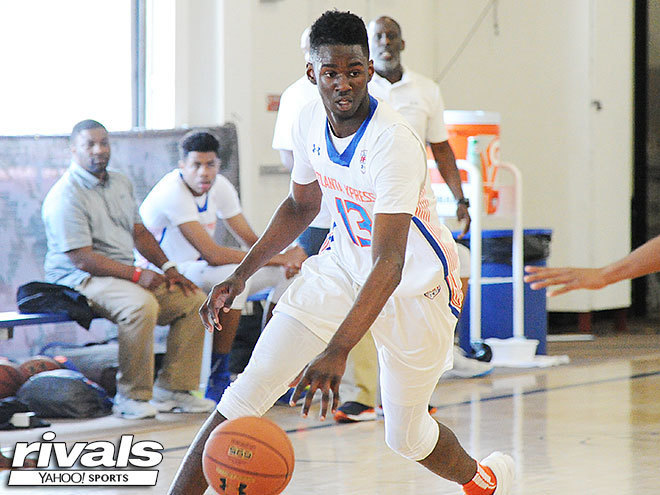 Five-star 2018 small forward Khavon Moore had Bruce Pearl, Brad Brownell and several high-major assistants watching him on Thursday morning.
Head coaches from Baylor, Houston, Texas A&M, Kansas State, Cincinnati, Memphis, Vanderbilt and VCU watched the South Jersey Jazz take on the Houston Defenders on Thursday morning. Four-star wing Savion Flagg is an effortless scorer for the Houston Defenders, and Cincinnati commit Trevor Moore lit it up from three-point range as he’s known to do.
Kentucky head coach John Calipari stopped in and watched five-star 2018 prospect Naz Reid for Sports U. Chris Mullen was also courtside.
Darius Day, a 2018 forward from the Florida Vipers, is a tough 6-foot-7 forward with the ability to stretch defenses with his three-point stroke. He was particularly strong in the first half of the first half where he had 12 points in about 7 minutes.
Three-star forward Jack Nunge had Vanderbilt head coach Bryce Drew following him around on Thursday. The 6-foot-10 Indiana native has a picture perfect three-point stroke and can protect the rim on the other end with his length.
Newton High School in Georgia is going to have an impressive backcourt for the next three years if they can keep Ashton Hagans and Colby Rogers together. Both are about 6-foot-4 and very talented. Hagans is more of a traditional point guard with great size and passing ability, while Rogers is more of a scorer with a pure stroke from deep.
Edit