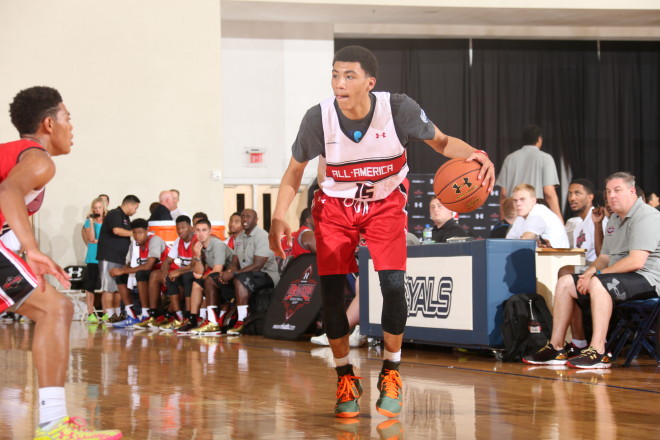 Whenever there is an update to national rankings like there was this week, fans tend to get very excited. They want to know which of their targets went up and which of them went down. But what about the college coaches?
How do they feel about rankings done by recruiting services? Do they help in identifying players like 2018's No. 31 player Jahvon Quinerly? We thought we would find out so we asked five coaches at the highest level of college basketball for their take on rankings.

“I always look at it because you want people excited about the rankings of the players coming to your school, but at the same time, you have to recruit with your eyes and watch the kid yourself. Obviously if you don’t feel good about a kid, he can still be ranked but you have to go with your gut. I definitely look at it to get a gauge of what other people think, but I’m always going to use my opinion and our staff’s opinion before I look at anybody else’s rankings.” – SEC assistant

“I think it’s about fit. It’s about what you have on your team and then trying to compliment that and add to it. In terms of the type of gifts a player can bring both on the court and off the court, I think fit is more important than rankings.” – Big 10 assistant

“I definitely put a little stock into them because the guys that do the rankings, whether you think they know what they are talking about or not, they have seen the kid more than you, so you have to look at it. Most of the time the kids that are ranked are getting those from playing in legitimate tournaments. Do I think it is the be-all and end-all? No, because there are a lot of guys that get ranked high that don’t do much in college and there are a lot of guys that don’t get ranked that are good in college. I think it’s a valuable tool, but I don’t think you can use it too much in your recruiting.” – SEC assistant

“I think every coach is different. If you start looking too much at rankings, you’re going to do a poor job evaluating because it’s really not about that. We use them minimally. If you look at some of the best teams in the country, they aren’t always made up of the highest ranked prospects. The other thing is you guys are rankings for different things than we are. Intangibles might be more important to coaches than the tangible things like athleticism. I’d also add that a lot of schools are getting creative now using transfers, graduate transfers, junior college players and going overseas to make up their team.” – Pac 12 assistant

“It’s a starting place, but honestly, we don’t use it too much. It doesn’t really impact the way we recruit. We’re more concerned with who do the local travel teams have and who we like than where a kid is ranked. And for us, we can use it as a way to eliminate certain kids because if they are ranked really high, we know the foot traffic is going to be pretty heavy.” – AAC assistant
at 12:46 PM