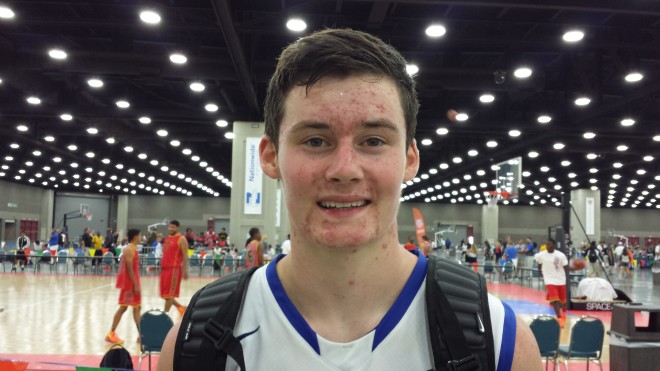 Massillon (Ohio) Jackson forward Kyle Young completed the regular season portion of his junior year averaging 20.8 points and 8 rebounds per game. Along the way, he added an offer from Michigan and new interest from Maryland, Northwestern and Wisconsin to go along with the offers he already held from Butler, Clemson, Purdue, West Virginia and Xavier.
Last week, the three-star prospect has Clemson head coach Brad Brownell and West Virginia head coach Bob Huggins at his first post-season game.

Young broke down how the offer from Michigan came about as well as his thoughts on Clemson and West Virginia’s programs.
Michigan: “Coach Beilein started watching me last spring and kept coming to watch me. He came to a couple games this year and ended up calling and offering me about a month ago. They like to get to know their guys and I’ve been up there for a football game and team camp.”
West Virginia: “They are playing well this year. That’s a good school and they have a good basketball program.”
Clemson: “I went there for a visit for a football game. It’s a really nice place and the coaches are really friendly.”

The Rivals150 prospect’s team is in the middle of a state tournament run, so that’s his main focus in the immediate future. After that, he’ll run with King James in the Nike EYBL during travel season. Look for a decision sometime after the travel season concludes in July.

Young’s recruitment appears to be pretty open. Several schools in the Midwest will be fighting over him, but Brad Brownell has Clemson in the mix with his ties to the area.
at 3:53 PM