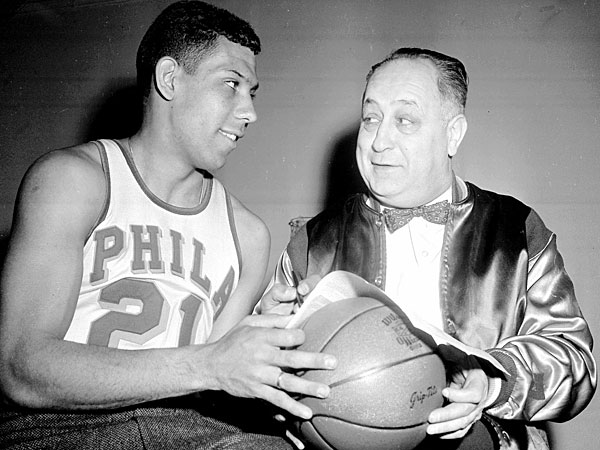 Guy Rogers (left). (AP photo)
Guy Rodgers, the Temple guard who led the Owls to Final Four appearances in 1956 and 1958 before becoming a four-time all-star in the NBA, has been elected to the Naismith Memorial Basketball Hall of Fame by the Veterans Committee.
Rodgers was one of five former players, coaches and administrators, including retired NBA commissioner David Stern, who were announced Friday as new Hall of Famers after being elected by various committees of the Hall.

He is the first player who competed during the Big Five era to enter the Hall of Fame.

Tom Gola of La Salle and Villanova's Paul Arizin played college ball before the creation of the Big Five.
Rodgers joins former Temple coaches Harry Litwack and John Chaney and former St. Joseph's coach Jack Ramsay as Big Five figures in the Hall. Rodgers, who played his high school ball at Northeast, was a three-time Big Five most valuable player. A great passer as well as scorer, he was a unanimous all-American selection in 1958 as the Owls finished third in the nation for the second time in three seasons.  He finished his Temple career with 1,767 points, a record at the time, and averaged 19.6 points.   Rodgers then went on to a 12-year career in the NBA, making the all-star team in 1963, 1964, 1966 and 1967. He totaled 10,415 points (11.7 points per game) and 6,917 assists (7.7 per game), leading the NBA in the latter category in 1963 and 1967. He was a 1958 territorial draft pick of the Philadelphia Warriors, playing in Philadelphia and in San Francisco after the franchise moved. He also spent time with Chicago and Cincinnati before closing his career after two seasons with the Milwaukee Bucks. Rodgers was a charter member of the Philadelphia Big Five Hall of Fame. He died Feb. 19, 2001.The Immaculata University teams that won three consecutive AIAW national championships between 1972 and 1974 were named as a finalist to be considered for election to the Hall of Fame. Their coach, Cathy Rush, already is enshrined in the Hall.

Read more at http://www.philly.com/philly/sports/colleges/temple/20140215_Temple_great_Guy_Rodgers_elected_to_basketball_Hall.html#82TOt6zbOcsTOyub.99
at 2:26 PM