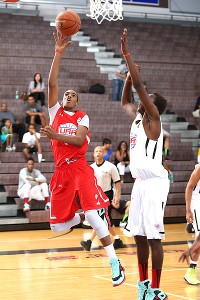 Kelly Kline/Under ArmourTroy Brown Jr. is the top point guard in the Class of 2017.
2. Strength in the frontcourt: The Class of 2017 has some pretty good point guards, which already puts it ahead of the 2015 class. The point guards in 2017 are lead by 6-foot-5 Penny Hardaway-clone Troy Brown Jr. There is still only one true point in the ESPN 25 (Jalek Felton and Trevon Duval are combos), but there is plenty of depth when looking at the next 50 players. Posts and wings dominate the class at the top.

3. Early impact: It is interesting to note that none of the players in our top 25 play in their age group (15-and-under level) with their summer club teams. They all play "up" in division, either one or two age groups. That lets you know the strength of the class. These youngsters are making immediate impacts despite limited experience.

5. Are true big men back?: The true center might be trying to make a comeback. Two of our top five players are true centers. DeAndre Ayton is more of a face-up player right now, but he is developing a solid back-to-the-basket game. Zach Brown projects as a back-to-the-basket player. Others who project as true low-post centers are Nick Richards, Mitchell Robinson, Kaleb Wesson, Wyatt Yess, James Banks and Brandon McCoy, just to name a few.

6. Point guard depth: There are several great prospects who just missed our top 25, including point guards Jaylen Hands and Trae Young, wing Mitchell Ballock and shooting guard Jordan Myers. This appears to be a deep class. As these talents continue to develop, there will be quite a few changes in our rankings.

7. Top prospect is foreign: The No. 1 player was not born in the United States. Ayton is originally from the Bahamas. He came to America in the seventh grade. If he can remain No. 1, he would be the only player who wasn't born in the U.S. to begin and end No. 1.

8. Super growth spurt: Porter is a super talented and skilled wing. He was already good, but he has been helped as a prospect by a tremendous change in his body. He was 6-4 last June but is now almost 6-8.

9. Positions are changing: This class is continuing the trend of skilled big men and scoring point guards. It seems that over the past few years, true low-post centers and pure point guards are disappearing. Centers are becoming more and more skilled at an early age and moving away from the basket, while point guards are becoming more playmakers and facilitators versus running-their-team-type guards. With the success of players such as Anthony Davis and Russell Westbrook, look for the trend to continue.

10. Age is a factor: Over the past few years, incoming freshmen are becoming older. This class continues that trend with almost all of our entire top 25 being older than 15.
at 5:31 PM