Who is the best high school basketball team in the country?

That question will be answered by the end of the weekend as the Dick’s Sporting Goods High School National Tournament began Thursday at New York Christ The King High School.

Las Vegas Findlay Prep looked to be on the verge of pulling away early in the second half of the third quarterfinal, but Seattle Rainier Beach came storming back, ultimately cutting the deficit to two points before Findlay was able to hang on, 67-59.

In the nightcap, Kevin Boyle made a return to the tri-state area as his Montverde (Fla.) Academy squad handled Sagemont (Fla.) 81-63 in the most lopsided game of the day. 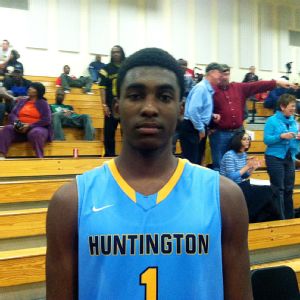 The first 31.5 minutes are almost an afterthought following the dynamic way in which Lyle closed the game. While he’ll be remembered for the game-winning 3-pointer he hit from the top of the key with just two seconds left and a defender draped all over him, his play on the previous possession was just as important. Huntington was trailing by one when La Lumiere (Ind.) went into a zone, hoping to confuse Huntington. Instead, Huntington got the ball to Lyle at the high post and let him go to work. He spun into the lane, attracted three defenders and dumped the ball to Thomas Bryant for an easy dunk.

The powerful wing might not have been the last-minute hero, but he was as efficient as anyone for Huntington. He made shots from behind the arc, moved well off the ball with curling screens and timely basket cuts and showed the versatility to bully smaller defenders on the block or score over top of them from the mid-range area. He’s a matchup nightmare because he’s so powerful for his position, but unlike most with his build, his offensive game isn’t just brute force. Therefore, almost everything he does translates to the next level.

Coleman didn’t have his customary shooting performance, especially in the first half, but his response to that slow start was most impressive. Even when his shots weren’t falling, he was still scoring, in large part because he was able to mix up his attack, get into the paint and get himself easy points at the free-throw line. Later on, he made a pair of huge 3-point shots with the game on the line, the last of which would have been the game-winner had it not been for Lyle’s shot.

Northside Christian came out of the gates with a lot of defensive intensity to catch Oak Hill off guard, but both of the Martin brothers stepped up and were critical to their team’s ability to settle down and take control of the game. Caleb was the first to respond, showing his length and smooth open-floor game to get to the rim, then following that up with a 3-pointer to get his team going. Cody was forced to take over as the team’s primarily ball-handler, where he proved be a dependable decision-maker and a valuable distributor. He asserted himself on the glass, adding 17 points to his brother’s 18. Both were an efficient 7-for-12 from the floor.


With Horace Spencer and Derryck Thornton both out of the lineup with injury and Rashad Vaughn and Kelly Oubre shaking off the cobwebs following Wednesday’s McDonald’s All-American game in Chicago, Victor stepped up to lead Findlay on Thursday. He looked a step quicker than earlier this winter, both in getting off the floor to finish around the rim and facing up his defender. He was a menace on the offensive glass, showed his soft touch on several short jumpers and even made a couple of high-level passes on the interior.

Simmons was a man among boys inside the paint, not only showing off his unmatched athleticism for a variety of explosive finishes and blocks but also showing some of his more subtle tools that don’t often get as much recognition. He impressed with his quick feet and interior reflexes, the soft hands to come up with deep catches (both low and high) and the ability to get easy points by beating opposing big men from rim to rim. Once he got going, he even stepped out to hit a corner 3-pointer. Simply put, Sagemont had nobody that could come close to providing the same type of physical presence and sheer talent inside.

Oak Hill received excellent production out of the Martin twins in the quarterfinals, and they’ll need that again Friday if they’re going to hold off Findlay’s one-two perimeter punch of Oubre and Vaughn. Findlay has almost no interior depth to work with, so it will need not only another big game for Victor, but help from Oubre on the glass as well. Ultimately, look for depth and tempo to become potential factors here, as Oak Hill will look to wear down a Findlay team that is currently playing with just seven players. Findlay will likely play quite a bit of zone to try to slow the game as much as possible.

Montverde ran away in its quarterfinal matchup while pushing the pace at every opportunity, getting a lot of easy baskets in transition as a result. Transition defense is going to be key for Huntington, but just as importantly, it will need to take care of the ball offensively and not settle for contested jumpers that could lead to potential run-outs for Montverde. Two of the best junior big men in the country will be going head to head, as Bryant and Simmons will likely be matched up. Lyle and D'Angelo Russell will lead their respective teams on the perimeter.
at 10:09 AM