Player unions and paying players are issues that touch all of college athletics, including basketball, and they will continue to be talked about during the summer. The 2014-15 season won't be a time to usher in rule changes, like this past season's emphasis on freedom of movement. But here are a few things to keep in mind as college hoops begins its offseason: 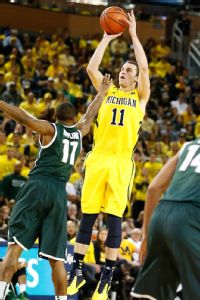 Declare or return: Almost every year, the saga of who’s coming and who’s going makes for a couple weeks of anxious coaches. There have already been official NBA draft announcements from Kansas’ Joel Embiid and Andrew Wiggins. Kentucky’s Julius Randle and Michigan’s Nik Stauskas are reportedly going, too, which prompted denials from both players. Generally, the biggest surprises come from those players who decide to return to school. Duke’s Jabari Parker, a projected top-five pick, has not yet publicly announced whether he’ll return for his sophomore season. There’s a growing scuttlebutt that he will stay in school, which would likely cement the Blue Devils as the preseason No. 1 team. For early entrants who don't sign with an agent, the NCAA’s deadline to withdraw from the draft and retain eligibility is April 15. But it’s a pretty soft deadline considering that the NBA’s deadline for underclassmen to declare is April 27, so some players could keep their intentions secret until well after the NCAA’s date.

Coaching moves: With Boston College hiring Jim Christian and Wake Forest selecting Danny Manning, California remains the lone major conference school with an opening. That means filling it (Xavier’s Chris Mack is reportedly the lead candidate) would potentially make for only a small ripple effect in the offseason. Then again, keep in mind that last year Brad Stevens didn’t leave Butler for the Boston Celtics until July. So until NBA jobs are filled, college coaches like Kentucky’s John Calipari, Iowa State’s Fred Hoiberg and even Connecticut’s newly crowned national champion Kevin Ollie could appear on the short list of candidates to fill those slots. Shortly after the national championship game, Calipari issued denials that he’s interested in the Los Angeles Lakers. But nothing can stop the rumor mill until the hiring and firing is completed, and that could go into the summer.

Transfer status: Maybe the blame belongs on the high school and AAU culture, where players jump around until they find a good fit. Or maybe kids have just wised up and realized that rather than ride the bench for four years, some coach at some school will value them more. Regardless of how it got to this point, the smoldering over transfers has been growing among coaches to the point that it’s about to be a fire. Some even feel that the rules are being outright exploited. Syracuse coach Jim Boeheim lamented during ACC media days last October about the transfer who leaves a school due to a sick family member, but then never sees the family after the transfer is completed. Some players have followed the model set forth by coaches themselves by playing for a lower-level school long enough to make a name and then transferring to a bigger stage. Toss in the graduate student waiver, and the culture of transfers seems like the college equivalent of free agency. Until the rules are changed, there are plenty of good players available. Over the next two months players will find new homes, and fan bases will find new reasons to be hopeful about their futures. 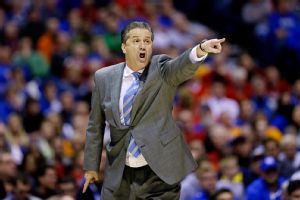 AP Photo/David J. PhillipJohn Calipari has already denied being linked to one NBA job, but questions about his job status could linger into the summer.
Recruiting quirk: Because of the way the schedule fell this year, the NCAA eliminated one of the April evaluation periods and opted against moving it to May. (Easter and SAT/ACT test dates provided the scheduling conflict in April.) One weekend might not seem like much, but it could end up having a big impact on the Class of 2015 for schools outside the major conferences. The spring dates usually allow those schools to identify who they’ll target, and July’s period offers the true evaluation. It could make the entire process a bit slower or cause some schools to gamble on players. Major conference schools that throw around major conference budgets are less affected by the shortened April window since juniors can make official visits after Jan. 1 and many of those coaches have already honed in on the players they want to recruit.

Silver lining: The earliest either side can opt out of the NBA’s collective bargaining agreement isn’t until June 2017, so any talk about increasing the league’s age limit is just talk. For now. But as one-and-done players trickle into the league each year -- there could be about 10 taken in the first round of this year’s draft -- the discussion perks up again. It’s an issue that is gaining momentum from the highest office in the NBA. New commissioner Adam Silver has made it known that he supports raising the age limit from 19 to 20. On Thursday he told ESPN.com that he’d also consider providing a subsidy to college players that would include a complete insurance plan. At the very least, Silver has indicated that he’s open to dialogue with the NCAA and the NBA players’ union. And that is a start in bringing a little more stability to the college game.
at 12:24 PM