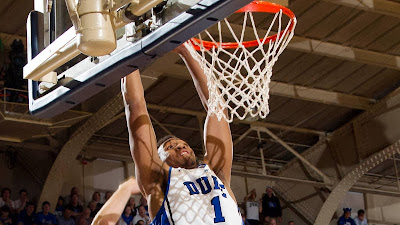 DURHAM, N.C. – Before they even took a dribble for Duke, Jabari Parker and Rodney Hood were anointed the focal points of the Blue Devils' offense.

After their debut together, it was easy to see why.

Parker and Hood each scored 22 points in their first game for No. 4 Duke, a 111-77 rout of Davidson on Friday night.

Parker, one of the nation's most heavily hyped recruits, and Hood, who sat out last season after transferring from Mississippi State, were a combined 17 of 20 with five of Duke's 13 3-pointers.

"First game in college - are you kidding me?" coach Mike Krzyzewski said of Parker. "That was a terrific performance."

"We just shared the ball quickly and scored pretty fast," Krzyzewski said. "All of a sudden, you've got points."

Duke effectively ended this one after a first half in which it shot 71 percent, held the Wildcats to one offensive rebound and scored 59 points - more than it had in any half in 2012-13.

Quinn Cook had 21 points, Rasheed Sulaimon added 20 and Amile Jefferson finished with 10 in Duke's highest-scoring opener since rolling up 121 points on North Carolina Central in 2007.

"I think we just clicked," Parker said. "They didn't know what we were doing out there. They weren't expecting it."

Southern Conference preseason player of the year De'Mon Brooks led Davidson with 24 points. Tom Droney added 16 points for the Wildcats, who have lost 13 of 14 against Top 25 opponents.

"That was a rather impressive display of offensive firepower," Davidson coach Bob McKillop said. "Their ability to do things with the dribble and off the catch, and in as many spots as they did, it's pretty darned impressive."

This one really got out of hand after a media timeout midway through the first half, when the Blue Devils outscored Davidson 20-6 out of that break while making a dedicated effort to drive the lane and draw contact.

Sulaimon and Parker hit 3-pointers roughly 45 seconds apart midway through the burst. Sulaimon connected again from long range with 7 minutes left to put Duke up by 20 for the first time, 41-21.

By that point, the Blue Devils were well on their way to their 102nd straight nonconference win at Cameron Indoor Stadium - a streak that doesn't figure to be seriously tested until No. 7 Michigan visits on Dec. 3.

Duke averaged 92 points in two exhibition wins, overhauling its style of play after 55 percent of its scoring departed last spring when Mason Plumlee, Seth Curry and Ryan Kelly wrapped up their stellar careers.

With a roster stocked with talented, interchangeable players - four members of the rotation are either 6-foot-8 or 6-9 - the Blue Devils went back to the baseline-to-baseline style that was the trademark of the Carlos Boozer and Shane Battier-led teams in the late 1990s and early 2000s.

On the first day of practice, Krzyzewski said Parker and Hood would be the focal points of this team.

In the first half, they combined to make 11 of 12 shots with 29 points, 10 rebounds and one turnover.

Quipped Hood, who finished 9 of 10 from the field: " wish I would have hit that one."

Parker, the ACC's preseason rookie of the year, became the fifth freshman under Krzyzewski to score at least 20 in his debut - and put on a show almost from the opening tip.

During the first 2 minutes of his college career, he knocked down a jumper, grabbed two defensive rebounds, fed Jefferson for the reverse layup that put Duke ahead to stay, then nailed an open 3 from the right corner that sent the Cameron Crazies into delirium.

Parker's 3 after a pretty jab step from the key made it 31-17, forced Davidson into a timeout and drew the entire Duke bench onto the floor for an embrace.

"He has a lot to learn and he wants to learn," Krzyzewski said. "He's got to keep doing everything a little bit better. But he was really outstanding tonight."