Duke won the lottery Friday when No. 1 Jahlil Okafor and No. 4 Tyus Jones announced their decision to suit up for the Blue Devils, Paul Biancardi writes.

"We just wanted the best opportunity to win," Okafor said after the decisions were announced live from the players' respective high schools on ESPNU.

Okafor and Jones are the most notable package deal in college basketball since Greg Oden and Mike Conley committed to Ohio State in the 2006 class, but it's unprecedented in that they never have played together on either the high school or AAU level.

Instead, their joint playing experiences have come primarily with USA Basketball, beginning in October 2010 and continuing with subsequent selections in each of the next two summers to national teams that won gold medals while traveling to Mexico and Lithuania.

It was on that initial trip to Mexico, in the summer before their sophomore seasons, that talk of a potential package deal originated. That conversation quickly intensified, and less than a year later, both young stars went on record as saying they planned to play together in college.

While their recruitment has been the subject of widespread scrutiny and speculation -- especially as it pertained to Duke given coach Mike Krzyzewski's role with the national team -- Okafor and Jones have been steadfast in their commitment to each other and seemingly unified in the process. They even went so far as to coordinate many of their in-home visits last spring before taking official visits to Baylor, Duke and Kansas together this fall.

Ultimately, Duke was able to overcome mounting momentum from Kansas in recent weeks. In so doing, the Blue Devils not only become the favorite to finish with the top-ranked national recruiting class in 2014 -- a feat they've yet to accomplish since ESPN first starting calculating class rankings in 2007 -- but also solidified their status as a national championship contender for the 2014-15 season.
With current Duke freshman Jabari Parker likely moving on to the NBA after one season and Tyler Thornton set to graduate, Okafor and Jones will have every opportunity to step right in and provide the type of true low-post and pure point guard threats that the Blue Devils currently lack. 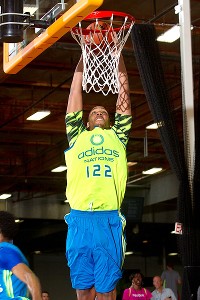 They'll also have the luxury of joining an already strong veteran core that is expected to include then-senior Quinn Cook as well as a deep and talented junior class with Rasheed Sulaimon, Amile Jefferson, Marshall Plumlee and potentially Rodney Hood should he decide against a move to the NBA after this season.

While Duke earned the grand prize of the 2014 recruiting class Friday, it certainly wasn't the only winner of the early signing period, which began Wednesday and will run through Nov. 20.
Moments after Okafor and Jones announced their decisions, No. 3 overall prospect Cliff Alexander (Chicago/Curie) announced his commitment to Kansas. Alexander, the top power forward in the ESPN 100, selected the Jayhawks over in-state favorite Illinois.

"I think Bill Self will develop my game the best, not like the others coaches couldn't, but Kansas was just the best fit," Alexander said. "Coach Self talked to me about playing a versatile forward role like he did with the Morris twins [Marcus and Markieff]."

Kentucky coach John Calipari announced the signing of his latest powerhouse class Thursday with four of the top-35-ranked players in the ESPN 100. He'll have a new-look frontcourt with No. 3 center Karl Towns and No. 2 power forward Trey Lyles, who might not be the dominant defenders Kentucky fans are used to seeing but will provide more perimeter skill and offensive versatility.No. 3 shooting guard Devin Booker provides Kentucky with a knockdown shooter capable of playing a few perimeter positions, and No. 4 point guard Tyler Ulis looks to add some long-term stability to the backcourt.

Louisville's Rick Pitino got a surprise signature Friday from No. 35 Quentin Snider, a local product who initially committed to the Cardinals only to decommit and give a verbal commitment to Illinois.

How closely do you follow your favorite team's recruiting process? Should signing days be nationally televised? Cast your votes! »

His return is a major boost to Louisville's class as he joins Chinanu Onuaku, Jaylen Johnson and Shaqquan Aaron to become the fourth ESPN 100 product to sign there.
Indiana coach Tom Crean scored a similar signature from James Blackmon Jr., who had reopened his recruitment after initially committing to the Hoosiers.
Other notable signings included SMU's Larry Brown securing the services of the fifth-ranked overall prospect and second-best point guard in the ESPN 100, Emmanuel Mudiay.
Steve Alford got the type of high-level prospect he needed in his first year at UCLA in No. 3 power forward Kevon Looney.
No. 9 Stanley Johnson (Fullerton, Calif./Mater Dei) wrapped up the day's events, becoming the second ESPN 100 commit to Arizona.
at 8:03 PM