Jaden Jones is in fifth grade. The native Texan enjoys school, playing with his friends and really loves playing basketball. He watches cartoons and receives recruiting letters from Division I programs. 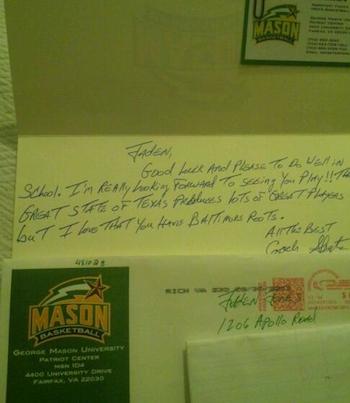 
That last detail is not an exaggeration; Jaden Jones is literally receiving actual, hand-written recruiting letters from Division I basketball programs. The first to hit up the 10 year old was George Mason, which sent along the letter you see at the right.

It goes without saying that this is an absolute abomination. The recruiting wars have gotten younger and younger, but sending official letters to 10 year olds is a joke. Or at least it should be a joke. Unfortunately, George Mason appears to be all too serious.
The video below shows why George Mason and others are already after Jones. Middle School Elite notes that Jones received attention from Nike representatives at a Nike Pre-Draft Camp, and also claims unspecified "major college coaches" are courting the signature of the Class of 2021 [Think about that: The Class of 2021!] prospect.

Jones is big for his age -- he's already 5-foot-5, compared to Shaquille O'Neal's 5-foot-4 at the same age -- and has enormous hands that can already palm a basketball. Typical growth projections would have Jones grow to be nearly 7-feet tall, and his half brother is 6-foot-5 and came from a mother who was five inches shorter than Jones' mother.

All of that means that Jones could eventually be a top basketball player in high school. Perhaps he could play in college, but that is eight years away. Eight years. Jones is at an age where getting Blow Pops and bubble gum on Halloween is a major concern and he's been courted by adults whose student athletes are focused on bling.

Only time will tell how Jones develops, and how he and his family handle the hype that is already swirling around the elementary schooler. All anyone can hope is that he remains insulated enough to have some semblance of a normal childhood, without more recruiting letters for at least a few more years.