Here are 10 storylines to watch for during the eight-day signing period: 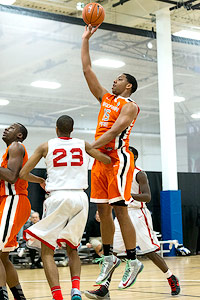 AP Photo/Damen Jackson via Triple Play New MediaJahlil Okafor is hoping to sign during the early signing period. Where will he end up?
1. Package-deal decision day
Word is that Jahlil Okafor and Tyus Jones are both hoping to sign during the early period, and that means the country’s biggest package deal should have a decision within days. All indications are that the duo still intends to go to school together, but the final destination has become unclear of late. Duke has long since been considered the front-runner, but there’s been growing chatter for Kansas, especially as it pertains to Okafor. Baylor is the dark horse, and while nobody seems to be talking about the Bears anymore, neither prospect has said they’re out of the running just yet.

2. Awaiting word from Alexander
We’re anticipating an announcement from Cliff Alexander, the nation’s third-ranked prospect. The 6-foot-8 big man took the nation by storm during the recent EYBL season and picked up offers from some of college basketball’s most prestigious programs in the process. Four of those remain in the hunt for his services. While Illinois and DePaul have been the perceived favorites, Kansas and Memphis are in the mix as well. Look for Alexander to trim one of those four off his list before his announcement -- and ultimately make his choice from a list of three final schools.

3. Early or late? That is the question
While Okafor, Jones, and Alexander are all expected to make their decisions in time to sign during the early signing period (that is, on or before Nov. 20), there is another group of prospects we still don’t know what to expect from. Justise Winslow just took his last visit, and he could be ready to decide. William Lee is another ESPN 100 prospect who could very well be ready in the coming days. Stanley Johnson was once targeting a January decision, but he now appears to be on the fence, as there has been mounting speculation that he could abandon those original plans in time to sign early.

4. What’s left for the spring?
With 87 players in the current ESPN 100 already committed and at least four more expected to make their decisions in time to sign early, we’re expecting over 90 percent of the current ESPN 100 to officially be off the board within the next 10 days. That’s an almost unprecedented percentage, leaving very little left on the table for the spring’s late signing period. The big prizes for those playing the waiting game are likely to be Myles Turner, Rashad Vaughn and JaQuan Lyle, along with any of the previously mentioned top prospects who ultimately decide against early signatures.

5. Care for a contingency plan
With so few prospects remaining on the board following this period, the major question is what happens to the programs that have gone the distance with top remaining prospects -- only to end up missing out on them. The best examples are Duke and Kansas. The Blue Devils and Jayhawks have gone head-to-head for Okafor and Jones and have passed on other talented guys as a result. Now they’re in a spot where the consequences of losing out on Okafor and Jones could be especially high, with no good contingency plans left on the board unless they’re able to score Turner, who isn’t likely to be excited about being perceived as anybody’s runner-up.

6. Competition for Kentucky
Kentucky currently has the top-ranked recruiting class in the country. If the Wildcats can hold on to that spot, it would be the fifth time in John Calipari’s six years in Lexington he has secured that distinction. The reality, however, is that it may be unlikely. And while Kentucky’s class is undeniably loaded, the 2014 group will be remembered as much for the guys who passed on the Wildcats -- Okafor, Alexander, Jones, Emmanuel Mudiay, Kelly Oubre and James Blackmon Jr. among others -- perhaps signaling a decline in what has been one of the most dominant recruiting periods for any program in recent history.

7. The Big East is back (or never left)
If this season's recruiting class is any indication, the demise of the Big East has been somewhat exaggerated. While conference realignment might have forever changed one of the country’s most historic conferences, it apparently has not done much to hurt the brand. Xavier, Seton Hall and Georgetown have all put together top-10 classes, and Marquette and Providence are not far behind. With five different programs among the top-20 classes in the country and a total of 15 ESPN 100 prospects having already popped for the Big East, the league is recruiting as well as any in the country.

8. What’s the Matta with this class?
Ohio State has the second-ranked recruiting class in the country, a group loaded with four ESPN 100 prospects and another big man who is just on the cusp of that list. Yet nobody seems to be talking about the Buckeyes. With so much attention being paid to the potential classes at Kansas, Duke and Kentucky, Ohio State has flown under the radar. The reality is that coach Thad Matta did his work early and did it well. D’Angelo Russell, Keita Bates-Diop and Jae’Sean Tate are all coming in next year, and Payton Dastrup is essentially joining the Class of 2016 after he takes a two-year Mormon mission. The Buckeyes have solidified their future as well as any program in America.

9. Talking about the Tar Heels
Roy Williams and North Carolina are in a similar situation. They have a trio of ESPN 100 prospects on board for next season, all ranked among the top 15 prospects in the country. However, because all three were already committed by last May, the Tar Heels haven’t been at the forefront of any recent recruiting headlines. It’s a mistake to sleep on them, though, as they have one of the country’s best scorers on the wing in Justin Jackson, a swingman with elite athleticism; an alpha-male mentality in Theo Pinson; and one of the most dependable point guards in the country in Joel Berry.

10. Mid-major impact
A quick glance at the class rankings will show that the mid-majors are once again well-represented among this year’s top recruiting classes. San Diego State, VCU and UNLV have all asserted themselves as national recruiters. Steve Fisher’s four-man class is headlined by a trio of ESPN 100 products in Malik Pope, Trey Kell and Zylan Cheatham, while Terry Larrier and Mike Gilmore lead a similar four-man group for Shaka Smart and VCU. Dave Rice and the Rebels have one of the best incoming frontcourt tandems in the country in Goodluck Okonoboh and Dwayne Morgan.
at 10:04 PM