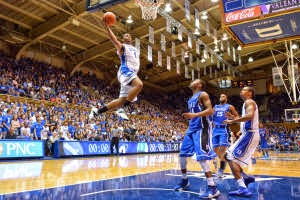 The scrimmage was the centerpiece of Duke's ''Countdown to Craziness'' celebration Friday - an annual night of frivolity before coach Mike Krzyzewski's team gets back to the serious business of preparing for the season.

Krzyzewski told the crowd during the scrimmage that ''we're trying to change the style of play'' and that ''we're going to play a lot faster.''

Parker had 16 points in one 15-minute scrimmage, then eight points, eight rebounds and a highlight-reel dunk in another one.

The first 10 points of the first game were scored by players who didn't see a minute of court time at Duke last season.

That includes two redshirts: Hood, who transferred from Mississippi State, and Dawkins, who sat out while continuing to deal with his sister's death when he was a freshman in 2009.

Dawkins received one of the louder ovations - along with Parker - during the one-at-a-time player introductions, and screamed ''I'm back, baby'' to the crowd.

Then, the first time he touched the ball, he buried a 3 over Rasheed Sulaimon on the right wing, prompting the Cameron Crazies to chant '''Dre all day.''

While the Blue Devils have been practicing for three weeks, this was the first chance for fans to get a look at the highly regarded freshman class - Parker, Semi Ojeleye and Matt Jones - in game situations

Parker and Dawkins led the Blue team during the first scrimmage while Hood and Ojeleye were on White. Dawkins hit two free throws with 0.9 seconds left in Blue's 36-34 win.

Then they switched up the teams, with four probable starters - Parker, Hood, Quinn Cook and Amile Jefferson - on White. Parker had the move of the night, a reverse, one-handed slam that even had Krzyzewski hiding a smile in White's 33-30 win.

Krzyzewski has said this team will revolve around Parker and Hood, and that's a noteworthy change for a program that almost always is as good - or as bad - as its seniors.

Gone are three from last year - Mason Plumlee, Ryan Kelly and Seth Curry - who all found spots in the NBA. They were the cornerstones of a team that finished 30-6 and reached the Midwest regional final before losing to eventual national champion - and future fellow ACC member - Louisville.

These Blue Devils enter the season as one of the favorites to make it at least one step further - to their 12th Final Four under Krzyzewski.

But there's plenty of time to worry about that.

For now, the focus was on having some fun before the games start counting.

As they do every year, the players entered the arena to the song of their choosing. Most opted for current R&B selections, but big man Marshall Plumlee went with ''Ain't Too Proud to Beg'' - and performed a full Temptations-style dance.