Yet another legacy defining moment for "The King"

Each significant contributor to the pantheon of NBA greatness faced their challenges in reaching the pinnacle of their success.  For Russell, it was the enduring cultural scar of racism, and the more charismatic arch nemesis Wilt Chamberlain.

For Kareem, it was the turbulent 60's and a misunderstood personality.

For Dr. J, he transcended the game, more iconic flotation on wings, mesmerizing the crowds, than championship muster, although he would eventually earn his ring in '83.

Bird and Magic had one another, a cultural cross-roads as racism receded into history, and the video-game pace of basketball began to capture the world.  The Bird-Magic rivalry saved basketball.  For those of us old enough to remember, NBA playoff games were on tape delay, after the 11 o'clock news and not on live TV, during the 1970's.

Jordan rode the Bird-Magic era into global superstardom.  Cashing in on his greatness and the massive technological expansion of cable TV sports.  Combined with the end of the cold war, American capitalism and access to new global markets spread American culture, and basketball in particular, and made the game a universal and global phenomenon.  There are stories of Russian TV airing Jordan's Chicago Bulls games from the late 1980's six and seven years later as if they were being played live.  The 1992 Dream Team cemented basketball as a global sport, and American players as Kings of the Courts.

"But not this King." 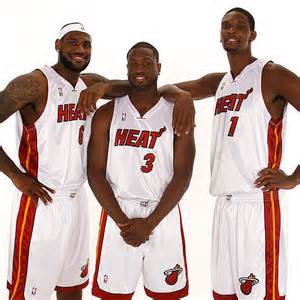 The Big Three in happier times.﻿

Lebron and the Heat will most likely win game seven.  not because they are at home, because the Pacers have played them very well in Miami.  They will win because the Pacers are young, the moment is big, and everyone in the Miami organization knows what is at stake.  But for Lebron, winning, even winning the championship, still will not be enough.

Had Jordan not retired the first time, and he remained and not retired the second time, he would have won 9 championships in a row.  Lebron is not behind Jordan in terms of years, he has time to match the 6 rings.  But he is already 1-2 in the finals;  he has several public relations mistakes;  and but-for game 6 in Boston in 2012, has largely shrunk from the biggest moments.  Jordan seized them.

As a fan of dynasties, I would prefer Miami figure out a way to advance to the finals and prevail.  Wade and Bosh have been useless;  Chalmers has always been over-rated;  Spoelstra has not used his bench in ways to effectively counter the Pacers size underneath.  If they advance and lose to the Spurs, it will be Duncan, with 5 titles, who will deserve the praise as the "King" of the NBA this past 10-15 years.  NOT Lebron.

But all of that is irrelevant,  when you are the King, the responsibility rests on your shoulders.  Jordan would will the Bulls to victory.  Will Lebron....the so-called King?