Once more unto the breach....

The NBA Finals have placed before us some rather compelling storylines.

1.  The Coronation.  Although still not Michael, Lebron "King" James will be well on his way to joining His Airness on the Mt. Rushmore of NBA basketball with a series victory over the Spurs, and ending the Spurs dynasty as a relic of the first decade of the new millennium.

2.  The Dynasty Confirmed.  If the Spurs pull the series out, with a  diminished Parker, and a useless Ginobli, then we will have to confirm them as one of the great all-time teams.  5 championship, 15 years, and defeating the heir apparent in Lebron.

And looking to the future....

3.  Wade / Bosh 2013-14.  Wade silenced some of his critics with his best performance in years.  Bosh was better.  But will we see the Big 3 in its current make up next year.  Wade will be back, but it is clear father time is taking its toll.  Bosh's contract is up - a series loss and most likely he will be dismissed for young, more physical talent.  All of which will forgotten should the Heat prevail. 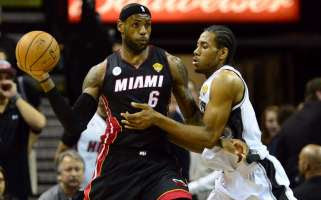 The Heat were dead-to-rites a few nights ago, and now the series pendulum has swung back in their favor.  Quite frankly, I have never seen a series quite like it, with such huge changes of fortune.    Bottom line - for Lebron to be considered ONE of the greats, he will need to carry his team, once more, to the podium and receive the Larry O'Brien trophy.﻿