National U-16 is the new "Dream Team"

Remember when the Dream Team was routing and thoroughly embarrassing opponents by ridiculous scorelines? The pre-“Wow, the rest of the world can play basketball, huh?” days? Well, those have long since been shown the door by the likes of Dirk Nowitzki and Manu Ginobili, but flashes of that dominance still rears its ugly head once in awhile. It did at the senior during the London Olympics when Carmelo Anthony and crew routed Nigeria 156-73.


On Tuesday, that dominance popped up at the U-16 level, with Team USA rolling to a 130-31 opening victory in the FIBA Americas Championship against Mexico.
In case you’re wondering, 99 points is a larger margin of victory than the original Dream Team or any U.S. senior national team has ever compiled. That it came against Mexico, a country far more familiar an organized in basketball competition than the likes of Nigeria (that 86-point margin of victory is the largest for the U.S. at the senior level), is a second strong indication of just how good this U-16 team is.
So are the three FIBA U-16 America's records that the U.S. team's rout produced on Tuesday, with the team tying the mark for most points in a game and setting new marks for most field goals made (56) and rebounds (69).
The team's win on Wednesday did come by 99 points, but it was still an impressive one. The U.S. knocked off Argentina, potentially the second-best team in the tournament, by a score of 96-72. That 24-point edge could have been even more as well, as the Americans took their foot off the gas in the third period and let Argentina close a 22-point lead to 17 before the U.S. pushed it back out to blowout proportions again.
Of course, after the impromptu dunk off that Prep Rally brought you earlier this week from this U-16 team’s practice we already knew that this team is chock full of ridiculous athletes. Now we know it’s absolutely crammed to the brim with slicing and dicing scorers, too. As noted by MaxPreps, seven different Americans finished the rout in double figures, with both Ivan Rabb and Harry Giles (remember him?) finishing with double-doubles.
Diamond Stone, a powerful and multidimensional 6-foot-9 big man, led the U.S. with 20 points and 8 rebounds. 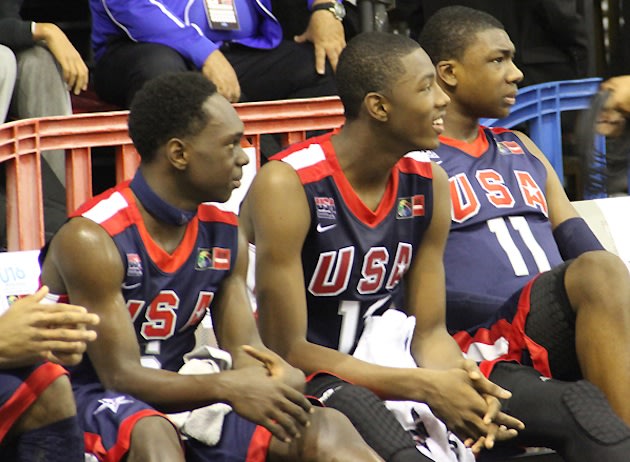 The current USA U-16 national team may be as dominant as the Dream Team — USA Basketball
"I was very pleased with the team's effort," USA head coach Don Showalter told MaxPreps of the win. "There are three things that we try to instill in our players. The first is unselfishness, the second is to play smart and the third is to play aggressively. I thought we accomplished those three things today."
With a 99-point win, it would be some chore for Showalter not to be happy with the way his team performed.


Whether the young, talented Americans can keep up their ridiculous scoring clip remains to be seen. The U.S. will continue play at the FIBA Americas Championship in Uruguay, and have matchups with the Bahamas and then the advancing squads from the other round robin bracket -- Canada and either Chile or Puerto Rico -- still to come.
If they keep rolling to 10-0 starts and 68-16 halftime edges, it doesn’t matter who the Americans line up against. They’ll steamroll them all, just like their more famous forebears did in Barcelona.

Want more on the best stories in high school sports? Visit RivalsHigh or connect with Prep Rally on Facebook and follow us on Twitter.
at 7:54 PM