Kansas men's basketball coach Bill Self announced Tuesday that Andrew Wiggins has signed a national letter of intent to play for the Jayhawks. Wiggins will be a freshman for the 2013-14 season at KU.

Ranked the No. 1 recruit in the class of 2013 by every recruiting service, Wiggins, a 6-7 forward from Thornhill, Ontario, Canada, announced his signing at Huntington (W. Va.) Prep. He chose KU over Kentucky, Florida State and North Carolina. Wiggins averaged 23.4 points, 11.2 rebounds, 2.6 blocks and 2.5 assists last season for Huntington Prep leading his team to a 30-3 record.


"Obviously, everyone in Jayhawk-land is overwhelmed and excited today," Self said. "This was a pleasant surprise because we never had an idea which way he was leading. Andrew did this the exact way he said he was going to. He played his cards very close to his vest as did his mother and father. I knew we were one of four. The competition was very stiff and we were fortunate that we were able to ink him today. He's a tremendous talent and a terrific kid. Probably an even better kid than he is a talent. We think he has a chance to be about as good a prospect as we've ever had.

"He brings athleticism, length, scoring ability and he's also an assassin, an alpha dog and we definitely need that when you have a whole bunch of young kids," Self said. "I think he's going to be not just a good player, but have the chance to be a great one. I know the people that support our program are going to be pleasantly surprised when they see him run and play the very first time he gets the opportunity." 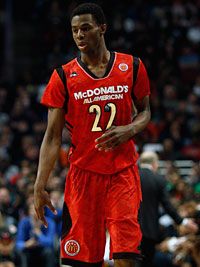 "We had an unbelievable class when we signed Brandon (Rush), Mario (Chalmers), Julian (Wright) and Micah Downs (2005-06); that's a big-time class," Self said. "This one has more upside. Andrew (Wiggins) has a chance to be the first pick in the draft. Joel Embiid goes from being an unranked player to being the top center prospect in the class. He's raw but so gifted physically. Wayne Selden is a McDonald's All-American and top-15 guy. Everybody knows about those three, but they are sleeping on are the other three. Conner Frankamp can play for anyone and so can Brannen Greene. Frank Mason is about as underrated of a point guard as there is in the class. It's been a great recruiting class, but we need to have a great recruiting class because we lost so many guys on a team that did pretty well this year."

Selden and Wiggins will join KU sophomore Perry Ellis as McDonald's All-Americans on the Jayhawk roster. Additionally, Wiggins played in most every postseason all-star this past spring.

Born into an athletically-gifted family, Wiggins' mother, Marita, was a track standout at Florida State and competed for Canada in the 1984 and 1988 Olympic Games. His father, Mitchell, played collegiately at Florida State and played in the NBA from 1984-92 with the Chicago Bulls, Houston Rockets and Philadelphia 76ers. Additionally, his brother, Nick, is a member of the Wichita State basketball team.

"Andrew's father, Mitchell, played at Florida State and had a very good NBA career," Self said. "His mother, Marita, ran track at Florida State and went on to be a two-time Olympian and would have been a three-time Olympian if it wasn't for the boycott (1980). It's a great athletic family and certainly I look forward to spending more time with them and getting to know them better. I'm so thrilled they put their trust in us and the belief he was going to mature as a man and a player.

"He's been a very well-coached kid," Self continued. "He played for CIA Bounce (located in Canada), which is one of the premier AAU programs in the country and had great success with that. He's spent the last couple of years at Huntington Prep and (head coach) Rob Fulford there has won as many games as just about anybody in America the last few years. He does a great job the kids. We feel we are getting a very mature and prepared player."