This is why he is NOT the greatest!

How many ridiculous, drunken nights at sports bars do guys go through the comical exercise of comparing MJ to Lebron?  Tonight's game should once again prove how academic such a conversation can be.

It's not close, the debate that is, and it never will be.

Our problem with Lebron wasn't the decision, it was quitting in game 6 against the Celtics in his last year in Cleveland.  Gave up, didn't try, mailed it in.

We wanted to believe, and the first 2 years in Miami made you hope.  Last year's Game 6 in Boston seemed to be the coming out party - an MJ-like performance that lifted his team to the finals and their first Championship.

The 2012-13 regular season seemed to confirm it, with an exclamation point upon the receipt of his legendary-confirming 4th MVP award.

But he will never be the greatest.

They may even win the title.

But ask yourself this question - would MJ lose an opening round game to a team missing its superstar, its second best player, and a critical contributor to the perimeter offense?

Never happen.  When MJ lost, it was to the whole team, in his early years when he was vastly overmatched, and never during the championship runs.

He would not have allowed it. 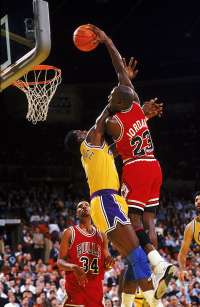 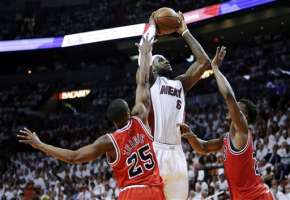 It's not even close.