In what was quickly dubbed "The Miracle at Pebblebrook" - the Kennesaw Elite 12U BLUE squad defeated the Gainesville Hurricanes in the quarterfinals of the TRU Elite MDC @ Pebblebrook High School.  Michael Rodriguez hit a game-winning three pointer as time expired to lift KE into the semis by a score of 38-36. 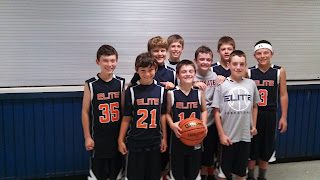 "You don't have time to think in a situation like that," commented Rodriguez.  "Coach Cherry drew up a perfect play, our bigs were covered, so the ball came to me.  I just fired it up, and the next thing I knew, I was underneath a pile of my friends!"
Rodriguez's heroics were made possible by an unprecedented comeback by KE BLUE.  A critical 3 pointer, and 3 free throws, in the second half by Cameron Cherry helped with the scoring.  Alex Windham was big in the post, as was Jordan Veneziale.  But 2 plays stood out the most in leading to the late-game theatrics.
First, KE 12U BLUE was trailing by 10, 31-21, with 2:50 to play.  By going to a full court man, KE was able to force several turnovers that had not bounced there way most of the game.  Second, Mickey Maguire DRILLED a long range three to cut the score to 36-35 with 0:00.4 left on the clock.  By all accounts, the game was over.
But the Hurricanes made a critical error.   They smartly decided to throw a long full court pass which, if done correctly, would have ended the game when the ball was touched.
But it wasn't touched.
﻿
This gave the ball back to KE under the basket with that 0:00.4'ths of a second remaining.  The play was designed for a big - Alex Windham - who was critical in his underneath play, to get the ball on a lob and tip it in.  That was not available, which left the screeners, Logan Jackson and Mickey Maguire, to roll down onto the opposite block.  That too was covered.

That left the final option - Michael Rodriguez - alone on the perimeter for the end-of-game thriller.

"This was a team effort.  I was glad to contribute in an important moment,"  commented Rodriguez.