Musings on the NBA playoffs.....

Golden State 97, Spurs 87.....Changing of the guard?  Not yet.  The Warriors held serve with a gritty performance from Stephen Curry and some 20+ numbers from Jarret Jack and Harrison Barnes.  The Spurs looked old at key moments, but in reality, the series goes back to San Antonio with the aging veterans as the favorites to advance.  Key Question - what did Jarret Jack dribble the clock out in regulation and take a challenged, very deep three as the final shot?  This was after a timeout, that couldn't have possibly been Mark Jackson's designed play.  It had to go to Curry, possibly Klay Thompson, or at the very least, Jack should have made a move with dribble penetration to draw a foul.

Also - anyone know the rule on Bogut's foot being out of bounds in the last Spurs possession of regulation.  I believe the ball was touching him when his foot was out of bounds, but it was also touching the Spurs' player, I think Danny Greene.  Is that a jump ball, Spurs ball, or was it the right call??  Let us know. 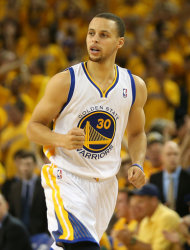 Memphis goes up 2-1.....OKC has been fatally flawed since letting James Harden sign with the Rockets.  They have unproductive post play, and without Russell Westbrook, they lose every match-up on the court, but-for the match up with Durant.  That may be enough, and if OKC wins game four, they regain the momentum and the advantage.  Is Durant good enough to advance the Thunder to the finals?  Yes.  Will he?  I am no longer betting on it.

Even when Westbrook returns next year, without a third option, this team is doomed to bridesmaid status well into the future. 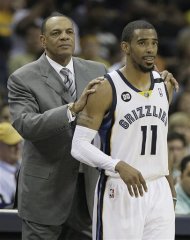 Pacers destroy Knicks 82-71.....JR Smith is non-existent, and Carmelo Anthony remains a one-dimensional option.  The Knicks won most of the statistical categories yet STILL lost to the Pacers.  Anthony deserves credit for carrying this team all the way to a division crown, and into the second round, but the Knicks have less talent and more dysfunction than the Thunder.  Give Indiana's no names credit, they will punch their ticket into the Conference finals against the......
MIAMI HEAT!  Despite the dismissal of Lebron as the greatest player of all time in a previous blog, he has still earned the recognition as one of the greatest and to be in the conversation.  Any productivity from Wade and Bosh should move the Heat into the Conference finals.  It may go six games, but the Bulls simply do not have the horses.
The formula to beat Lebron remains the same, a variant of the Pat Riley-90's Knicks teams, who learned from the Jordan Rules created by Chuck Daly - turn the game into a wrestling match, have brute force shut down elite talent.  It can work, but without a full roster, it won't.  HEAT in six. 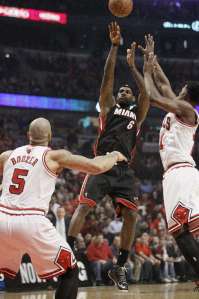